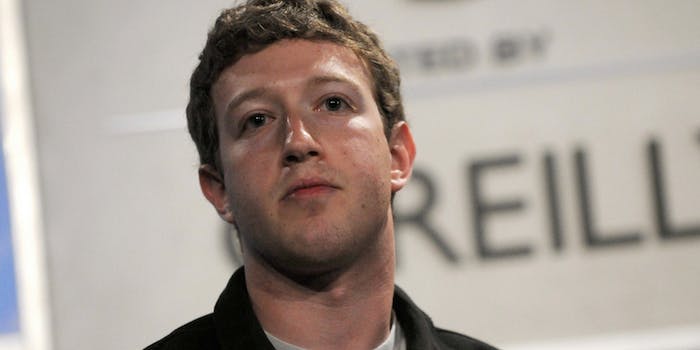 Zuckerberg calls Snapchat a ‘privacy phenomenon’, whatever that’s worth

Maybe he was being sarcastic?

Facebook is not exactly known for its easy-to-use privacy features. Information we thought we blocked regularly shows up on pages, or becomes searchable. Old messages pop back up in plain sight. Complaints about Facebook’s ever-changing and confusing privacy settings are ubiquitous. The same can be said of Snapchat, which has experience plenty of privacy issues as of late… which is why it’s both strange and amusing that Facebook CEO Mark Zuckerberg is in awe of the app’s privacy mindset.

In a talk at Stanford University yesterday, Zuckerberg said he thinks Snapchat is a “privacy phenomenon.” He went on to explain that despite Facebook’s own privacy problems, keeping users information safe is a main priority.

Of course caring about privacy is at odds with what Facebook actually does in regards to keeping users’ information private; namely that it often seems it doesn’t care. Default privacy settings recommend sharing content publicly and with followers, not just friends. In 2012, even Zuck’s sister, Randi, found it hard to navigate Facebook’s privacy settings, accidentally sharing photos with the public.

Snapchat, too, has had its privacy failings. There have been photo leaks, the ability to open snaps in court cases, numerous hackings, and proof that the files don’t really leave the phone even though the app purports that they “self destruct.”

In his talk, Zuckerberg said that Snapchat allows users to share content they may not have with regular texting. He likened it to Facebook’s place between a personal blog’s public content and an emails intense privacy.

The Facebook co-founder hasn’t spoken publicly about Snapchat until now. The company tried to purchase the app and was turned down but Zuck seems to still have the utmost respect for an app he believes to have changed content sharing and privacy.

While it’s noteworthy that the CEO is speaking out about Snapchat post-failed buyout, commending an app for being on the forefront of privacy as its involved in backlashed over exploiting user data is an odd choice. Especially for a company that so often finds itself in trouble with privacy advocates