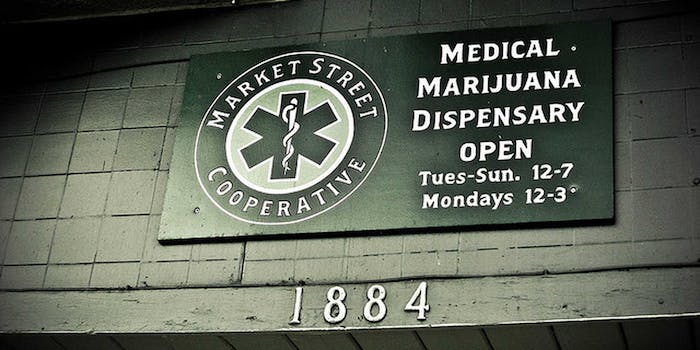 You won’t see any ads for marijuana dispensaries on Facebook or Google in the near future. Though it’s legal for recreational use in Colorado and Washington, the drug remains off limits for Internet giants.

Facebook, Google, and Twitter are refusing to promote the use of Cannabis at the moment. This could be because it’s legal at a state level, but still illegal on a federal scale. However the websites are not allowing for weed advertisements even in the states where it is legal.

GigaOm reports that the National Cannabis Industry Association tried to pay Facebook to post advertisements for marijuana-related stories, but it refused, citing its advertising guidelines. Similarly, Google’s policies state that “Google doesn’t allow [advertisements for] substances that can alter the function of the brain to induce unnatural euphoria, or alter reality.” Which is interesting, given that Google has been under fire for years regarding its ad spots for illegal drugs.

The legalization of marijuana in parts of the U.S. hasn’t spurred the weed-promoting frenzy that one would have expected. The reluctance of these dominant companies is surprising because their use of geo-targeting would allow ads to appear only in states where it is legal.

“The risk of attempting to allow ads promoting the drug in certain states or countries where it is legal is too high (no pun intended) for us to consider at this time,” Facebook spokesman Tim Rathschmidt told GigaOm.

While Facebook will not advertise or promote the use of pot, the site will post ads advocating marijuana legalization.

Facebook and Google have said that they update their policies often, though, so don’t be surprised when a $25 gram of “Colorado Kush” fills the right side of your screen in the next year.