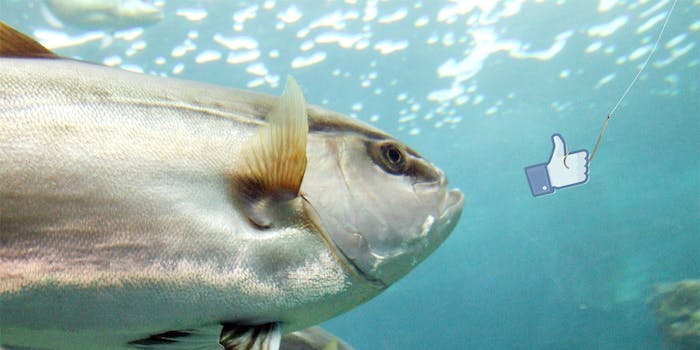 Australian TV presenter and science buff Derek Muller took to YouTube to present his findings from his attempts to purchase likes through Facebook’s official advertising system. He found that the more likes he purchased to promote his educational science channel Veritasium, the less he saw people interacting with the page in terms of click-throughs and comments.

Muller found that the 80,000 likes he had purchased from Facebook were primarily from users in India, Philippines, Pakistan, Indonesia, Nepal, and Sri Lanka and accounted for only 1 percent of his overall engagement.

“These are the profiles that followed me when I used Facebook advertising and they are worse than useless,” Muller states.

Muller believes that purchasing the likes made him dependent on Facebook. In short, he claims the paid likes had a detrimental effect on his overall engagement, forcing him to pay more money to promote posts to reach his real audience.

Over the past three years, the countries mentioned above have become popular with businesses selling fake Facebook followers and likes, a practice banned on the social network.

These companies, such as Paid to Like, create thousands of fake profiles each day to artificially inflate users’ subscriber counts. One company, BoostLikes.com, even offers “United States based likes” for a premium price (more than double their standard price) as a way to protect you from Facebook’s banhammer.

In August 2012, Facebook revealed to the Security and Exchange Commission that 8.7 percent or roughly 83 million of its profiles were fake, and they were reportedly deleted. But Muller’s experience points to a much larger and persistent problem.

“If Facebook were serious about cracking down on fraud, shutting these pages down would be a good place to start,” Muller told me. “I have no idea if this will affect Facebook’s stock at all. I have told friends and family that I don’t think the company is a good investment because of my experience with it. I think as more people become aware of the limitations of its advertising business fewer will be keen to invest.”

Fake likes don’t help us. For the last two years, we have focused on proving that our ads drive business results and we have even updated our ads to focus more on driving business objectives. Those kinds of real-world results would not be possible with fake likes. In addition, we are continually improving the systems we have to monitor and remove fake likes from the system.