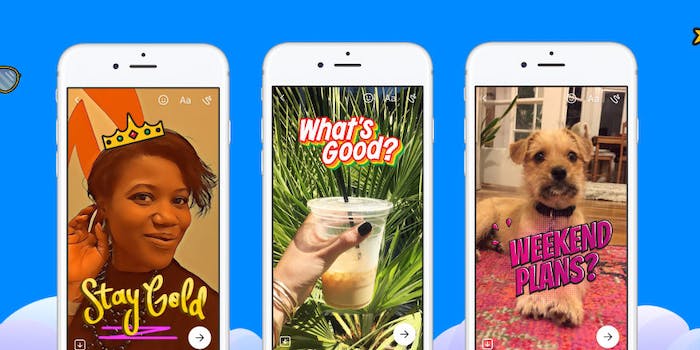 Facebook adds Snapchat Stories clone to its main app, too

You can share a stream of photos and videos that expire in 24 hours. Sound familiar?

It was only a matter of time. Instagram introduced a Snapchat Stories copycat last fall, and WhatsApp introduced its own version, Status, last month. Now, Facebook has its own version of the popular feature in its main app, and in Facebook Messenger.

Today Facebook is rolling out Facebook Stories. At the top of the Facebook app for iOS and Android, you’ll see a row of circular icons of your friends’ profile pictures. You can tap one to see a collection of their most recently shot photos and videos (using the app’s new camera icon, located in the top left of the Facebook app). These photos and videos are only viewable for 24 hours, and won’t otherwise show up in your Newsfeed or Timeline.

If you’d rather share these photos or videos with just a few friends, you can also send them Direct. In this option, your friends can view the content once, replay it, or send you a reply. Once the conversation around the video is over, the content is no longer viewable.

And earlier this month, Facebook Day rolled out to Facebook Messenger on iOS and Android. It does exactly what you’d expect it to (if you’re already familiar with Snapchat, Instagram Stories, or WhatsApp’s version of this feature). You tap the camera icon to take a photo or video. Then, you can decorate that image with illustrations or special effects. And then you can tap a button (an arrow in the righthand corner) to save it to your “Day,” sharing it with your friends. Facebook Day lacks some of the customization tools you get in other apps such as Snapchat and Instagram, but otherwise, it’s very similar.

You can watch photos and videos added to this stream for 24 hours, and then they expire. While it’s viewable to all of your Facebook friends by default, you can customize and limit that audience if you choose. If you post something and then change your mind, you can delete it by tapping a three-dot menu button in the bottom right of the image. For now, businesses aren’t allowed to use Day.

The intent of Facebook Day is slightly different from that of Snapchat Stories and its other clones. In Facebook Messenger, this feature is designed around sharing what you’re up to now, or what you want to do with your day. It’s not meant to be a catalog of your day’s activities—although near the end of its 24-hour lifespan, that is what it will evolve into. Facebook mitigates that issue with how it presents Days to app users, though.

To view someone’s Day, Facebook is using a similar interface as Instagram Stories. Above your conversation threads in the app’s home screen, you’ll see thumbnails of friend’s Days, which you can tap to watch. These streams are listed in reverse chronological order, so you can peruse the most recent postings first. And in line with its focus on what’s happening in the present, users who are currently chatting in the app get a green dot at the bottom of their Day thumbnail. This does seem like a clever way to potentially rekindle a conversation. If you’re chatting with a friend who updates their Day, you’ll get a notification both in your Messenger thread and the Facebook desktop app to check it out.

Like we said, it was only a matter of time before Facebook (which owns Instagram and WhatsApp) integrated this feature into one of its own apps. No word if Snapchat is sweating bullets—it may still be focused on its recent IPO.