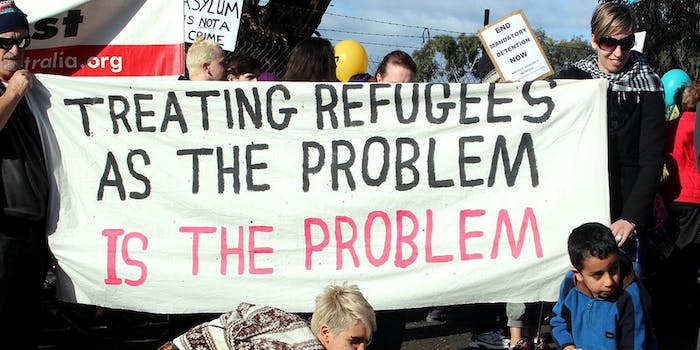 Zuckerberg said he was working on it, but his company won't say how.

Facebook CEO Mark Zuckerberg told Germany’s frustrated leader that his company was considering ways to address the anti-immigrant rhetoric sweeping across the social network in response to the European refugee crisis.

German Chancellor Angela Merkel asked Zuckerberg about the anti-refugee sentiment at a United Nations development event on Saturday. Merkel, who has been more welcoming toward refugees than other European leaders, expressed frustration at the apparent surge of xenophobic Facebook posts disparaging refugees.

“Are you working on this?” Merkel asked Zuckerberg.

A Facebook spokeswoman declined to explain what Zuckerberg meant, saying only that the company was “committed to working closely with the German government on this important issue.”

To stem the tide of hateful posts, Facebook partnered with Germany to create a “task force” of Internet companies that will evaluate flag posts and delete inappropriate content. German law makes it a crime to publicly incite hatred or violence against religious or ethnic groups or to attack their dignity. A spokesman for the German justice ministry told the Wall Street Journal that the partnership with Facebook would help Germany “better identify content that is against the law and remove it faster from the Web.”