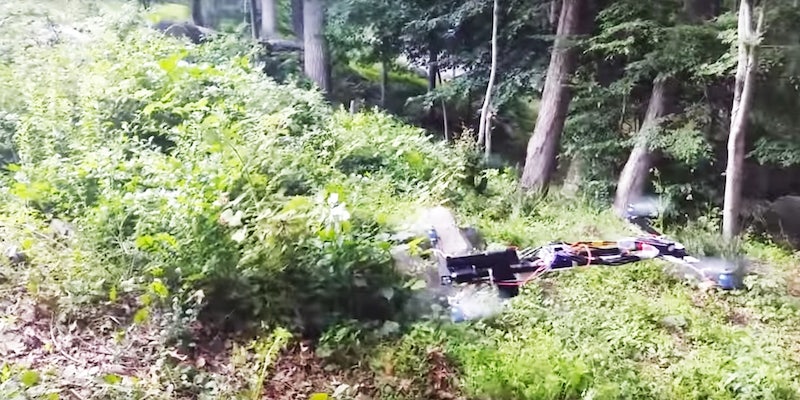 The case will have national significance for recreational drone users.

A father and son will fight the Federal Aviation Administration on whether they can be forced to disclose information about gun-firing and flame-throwing drones shown in two YouTube videos recorded in their Connecticut backyard.

The outcome of the case will have national significance for recreational drone users, setting a precedent for the amount of authority the FAA will have in terms of regulation.

Bret Haughwout and his son Austin Haughwout, 19, are questioning the agency’s authority in regulating recreational drone use, claiming the subpoenas issued by the U.S. attorney’s office in support of the FAA violate the constitutional right to be free from unreasonable searches and seizures.

The court showdown is set for Wednesday in New Haven, where a hearing before U.S. District Judge Jeffrey Meyer will determine whether the Haughwouts have to comply with the subpoenas.

The two videos were shot from the family’s backyard in Clinton, Connecticut, and uploaded to Austin’s YouTube channel last year. One video shows a flying drone equipped with a handgun firing rounds and has over 3.7 million views, and the other shows a flying drone with a flamethrower igniting a spit-roasting Thanksgiving turkey.

Both father and son have refused to comply with the subpoenas that were issued in November and December, which seek information about the drones used in the videos.

According to federal prosecutors, the subpoenas were connected to an investigation conducted to ensure the safe operation of “aircraft.” The investigation falls under the FAA’s authority to investigate potential violators of regulations prohibiting the operation of aircraft in a careless or reckless manner.

Whether the Haughwouts have violated these regulations is in question. As Assistant U.S. Attorney John Larson wrote in a court filing, “Based on media reports, the FAA believes that the respondents have built and/or operated at least two (drones) carrying weapons with the capability of causing serious injury to a person or property.”

The FAA proposed its first set of regulations for the commercial use of drones in June, but these do not include recreational use. According to the agency, there are additional requirements for recreational use, including the registration of any unmanned aircraft weighing more than 0.55 pounds and providing notification to airport operators before flying drones within five miles of airports.

Mario Cerame, the Haughwouts’ lawyer, does not believe the FAA should be relying on aircraft regulations in terms of the subpoenas directed at his clients over their recreational use of drones, claiming that “this is a kid playing in his backyard.”

“They shouldn’t use airplane regulations,” said Cerame. “They should go get the authority from Congress. It’s about keeping the government in check as to what Congress said they can do,” Cerame told CBS Connecticut.

In a state lawsuit, Austin claims he was expelled from Central Connecticut State University on “bogus threatening allegations” by school officials who were concerned about the drone videos, and the lawsuit seeks his reinstatement to the school. However, school officials deny the allegations, stating that Haughwout was expelled for making threatening statements and gestures toward other people on campus.

Austin has faced other charges over the last two years. On Thursday, he was charged with enticing a minor with a computer, attempted sexual assault, and possession of child pornography after it was found on his cellphone.