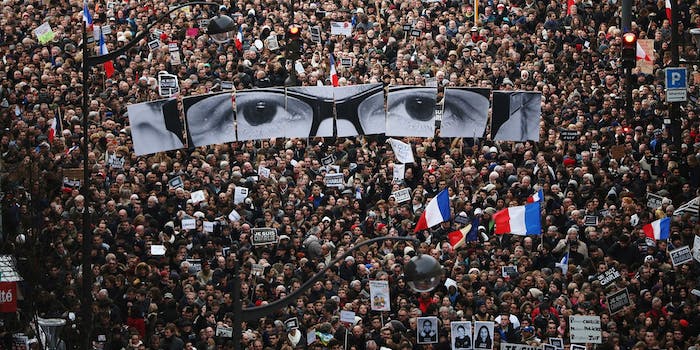 Is this really the best response?

A coalition of 12 European Union nations is using the terrorist attack on the French satirical newspaper Charlie Hebdo, which left 12 people dead, to call for drastically increased Internet surveillance.

“We are concerned at the increasingly frequent use of the Internet to fuel hatred and violence,” the countries said in a statement, “and signal our determination to ensure that the Internet is not abused to this end.”

To the people who believe—based on studies that show—that surveillance is intrinsically a form of censorship, the statement is a chilling one. It’s especially disturbing given the political context for the Charlie Hebdo attack, which was reportedly ordered by an Al Qaeda affiliate. The terrorist attack is widely believed to be an attempt by the group to stifle caricatures of the Muslim prophet Muhammad.

The E.U. ministers’ letter openly calls for a new approach to censoring terrorists’ Internet posts. It asks for a “partnership of the major Internet providers” to report and remove “material that aims to incite hatred and terror.”

The heads of many E.U. nations represented in the letter, including French President Francois Hollande, U.K. Prime Minister David Cameron, and German Chancellor Angela Merkel, all recently appeared at a march to show their solidarity with Charlie Hebdo.

In addition to this effort, we have resolved—to combat terrorist propaganda and the misleading messages it conveys—to develop positive, targeted and easily accessible messages; able to counter this propaganda, aimed at a young audience that is particularly vulnerable to indoctrination.