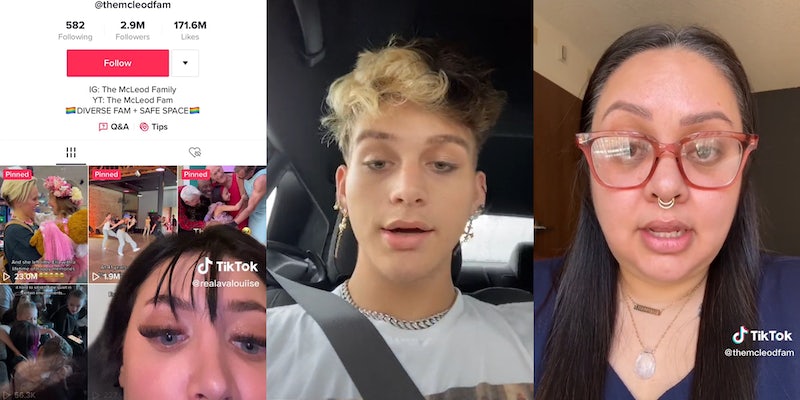 Seventeen-year-old was an up-and-coming beauty influencer whose hundreds of thousands of followers tuned in for his makeup transformations and frank discussions about life as a gay teen. Peters (@ethanissupremee) also posted openly about fighting the addiction that ultimately claimed his young life.

Now Peters’ best friend and mother say a harassment campaign led by Disney fans contributed to his relapse and overdose.

Louise says that Eeka McLeod (@themcleodfam) sent her followers at Peters after he posted a TikTok making fun of her and other Disney moms. She and Peters’ mother say he endured weeks of harassment that included doxing, leaked nudes, and death threats—with people also contacting his sponsors and manager, who dropped him.

McLeod disputes that, saying both Louise and Peters were engaged in an extended clout-chasing campaign, one which has now been revived online.

Depressed, isolated, and worried about his career, Peters started taking drugs again, according to his family. He passed away from an opioid overdose on Sept. 5, 2020. It is believed that his death was an accident.

“Unfortunately, my child took a drug that was laced with four times the lethal dose of fentanyl … He was wanting to escape the pressure,” Peters’ mother, Deanne Krusensterna, told the Daily Dot in a phone conversation on Monday.

Both Louise and Krusensterna believe that backlash from Disney fans factored into his relapse.

“The Disney moms and this fan group is why,” Louise told the Daily Dot over the phone on Monday.

McLeod insists that she had nothing to do with Peters’ overdose. In a TikTok response to Louise’s post accusing her of encouraging her fans to attack Peters, McLeod said that she was the victim, not Peters. She accused Peters and Louise of harassing her until she threatened to sue Peters. McLeod also accused Louise of lying about her friend after his death.

McLeod declined to comment in response to multiple requests sent via email.

Louise’s initial TikTok has over 4 million views. McLeod’s has more than 1 million.

Arguments are breaking out in comments on both women’s videos. While plenty of people are taking sides, many aren’t sure who to believe or think that both are leaving things out. Many posts include “bffr” or “be fucking for real.”

The women’s versions of events differ in almost every respect, except for how it all began.

All agree that the conflict started when Peters posted a TikTok making fun of Disney moms.

In the video, Peters said that he’d just come across an account. McLeod’s TikTok page appears behind him via green screen.

“These fat, old Disney moms who literally only go to Disney, like they get married at Disney, they poop out their kids at Disney. They do everything there,” he said, laughing, “Like someone call CPS [Child Protective Services] on her fucking kids.”

McLeod said in her response this week that she responded to Peters’ TikTok then by posting a “video in which I said nothing” implying that she did not send her followers after Peters. The Daily Dot was unable to find McLeod’s response video on her page. It may have been deleted.

Per Louise’s telling, Peters simply “made a joke” that “teenagers would find funny.” She said it wasn’t solely directed at McLeod.

She said that Peters deleted his video about McLeod shortly after posting it. Louise said that McLeod spent weeks posting about Peters, which launched an avalanche of abuse at him. The Daily Dot did not see any posts on McLeod’s page about the incident, although they may have also been removed.

“Her video got millions of views and he started getting a lot of hate, which was really hard on a teenager who already had depression and mental health problems,” she said.

“But if it ended there, it would’ve been fine.”

It didn’t, she says.

An interview Louise did with Inside Edition shortly after Peters died alluded to “controversial TikToks” that led him to lose endorsement deals.

Comments on Peters’ TikToks from the time show him being inundated with people demanding he apologize. Some of these demands tagged McLeod’s previous handle, @californiadisneyfam.

“Apologize to @californiadisneyfam NOW,” one wrote that July.

Krusensterna told the Daily Dot that her son’s harassers also contacted her. “I was getting DMs from Disney moms telling me what a horrible child I had.”

When she asked Peters about it, he told her what had happened.

Louise claims that McLeod personally contacted Peters’ sponsors to urge them to drop him. According to her, when that didn’t work, she says McLeod urged her followers to do the same.

“Then it just went apeshit with them contacting his manager, contacting brand deals that he had had forever and getting him cancelled,” Krusensterna agreed.

Peters lost endorsements and his manager, according to his mother, who said he was distraught.

“He called me crying every single day saying he couldn’t do life anymore,” Louise said. “He was devastated.”

In late July 2020, Peters posted an emotional TikTok. Tears rolled down his face in the short video captioned, “I wanna end it all tbh I can’t keep dealing with this.”

The video included text boxes claiming that after he made fun of a “30yo Disney mom,” she and her thousands of followers leaked his address, phone number, family’s phone number, nude photos, and sent death threats.

“All because I said she’s weird for liking Disney,” he wrote.

He also apologized at some point. In an undated TikTok he later deleted, Peters said, “Y’all were right. I ain’t gonna fucking lie. Apparently I did say that. Sorry for calling you fat. That was really out of line. That was rude.”

“I do think your obsession with Disney is weird. That’s just fucking weird to me.”

Peters disabled comments on his TikToks when he made the tearful post about being harassed by Disney fans.

A few weeks before his death, he turned them back on. People continued demanding he apologize in the comments. It’s not clear if they weren’t aware that he had apologized or if they were dissatisfied with his apology.

In her recent TikToks, Louise said that she contacted McLeod to ask her to stop going after Peters when she saw how deeply he was being affected.

On TikTok, McLeod acknowledged that Louise reached out and told her that Peters was suicidal and asked her to leave him alone. McLeod included a screenshot of their correspondence in which Louise said she “could’ve taken the high road as AN ADULT” and that “going out of your way to encourage your followers to message people he’s associated with was the wrong thing to do to a teen.”

The text thread shows that McLeod responded, “Pls just get him some help.”

In a subsequent TikTok, Louise included a screenshot of a message she purportedly sent to McLeod before Peters died. She wrote that Peters was suicidal, being threatened and doxed, and had been dropped by his manager.

“Mind you he is A MINOR! You are how old and you dragged a MINOR?!” she said.

Louise says that she doesn’t want people to harass McLeod over what happened to Peters. She said she’s hoping to inspire a dialogue about cancel culture.

“I’m not trying to destroy her,” she said on TikTok. She’s continued posting about Peters and McLeod in recent days even as she’s being inundated with people accusing her of lying and using her friend’s death for attention.

Krusensterna’s voice broke discussing the comments, saying that “no mother” should have to read the things people posted about her son after his death.

“TikTok is an evil, evil place,” she said.