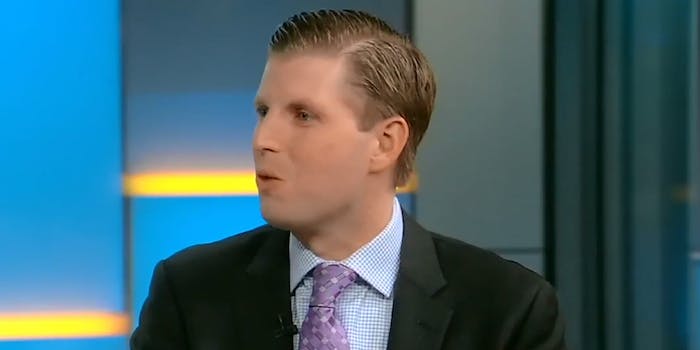 He also forgot how old his brother was and clearly doesn't understand what a metaphor is.

Eric Trump fervently defended his father, President Donald Trump, against a growing number of calls of racism in a series of interviews on Fox News on Tuesday and Wednesday—at one point suggesting the “only color” his father sees is green, the color of money.

Speaking with Fox & Friends, a favorite talk program of the president, on Wednesday morning, Eric Trump defended his father against the calls of racism that have mounted after he allegedly called several African countries “shithole” nations during a meeting about immigration last week.

His son’s defense? The president couldn’t possibly be racist because the “only color he sees is green.”

“My father sees one color, green,” he told the Fox & Friends hosts. “That’s all he cares about, he cares about the economy. He does not see race, he’s the least racist person I’ve ever met in my entire life.”

.@EricTrump defending @realDonaldTrump on @foxandfriends: "My father sees one color, green. That’s all he cares about, he cares about the economy. He does not see race, he's the least racist person I've ever met in my entire life." pic.twitter.com/FcGpWFMCky

But that wasn’t Eric Trump’s only interview on Fox News.

On Tuesday night, he was interviewed by far-right pundit and ardent Trump supporter Sean Hannity.

However, it appeared that Eric Trump forgot how old his little brother was. Here’s how the exchange went:

“I know you guys are tough…then they pick on the first lady and your 11-year-old brother? And they don’t even see that as being wrong,” Hannity said.

“It’s almost the worst of humanity, there are no boundaries, you don’t go after a 12-year-old child, you just don’t,” Trump responded.

ERIC TRUMP doesn't know how old his brother BARRON is.

ERIC: "It's almost the worst of humanity, you don't go after a 12-year-old child."

In the same interview, Trump also appeared to not understand what a metaphor was.

.@EricTrump reveals that he has no idea what "metaphor" means. pic.twitter.com/F6kaTsgg4L

Regardless, his father was excited, plugging the Wednesday morning interview before it happened.