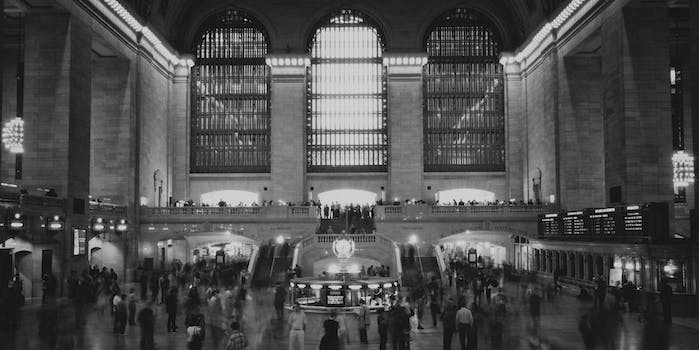 Anti-police brutality demonstrators have taken to the streets and landmarks of New York City to protest the death of Eric Garner at the hands of an NYPD officer.

The demonstrations began on Wednesday following news that a Staten Island grand jury decided to not indict officer Daniel Pantaleo for choking Garner to death earlier this year after the 43-year-old was suspected of selling loose cigarettes, a low-level crime.

The first protest took place at Manhattan’s Grand Central Terminal at 4:30pm ET, where as many as 50 demonstrators laid on the floor of the iconic train station’s main concourse, where hundreds of thousands of people pass through each day.

In a sign of the times, many of the protesters remained on their phones as they laid defiantly on the floor.

“We’re grieving again for the loss of Eric Garner, who was a father, a husband, a son and a good man who should be with us and isn’t,” he said.

President Barack Obama, who this week announced a plan to provide $263 million to better train an equip local law enforcement in the U.S., reiterated his understanding of the frustration African-American communities feel about their treatment by police. He further vowed to continue efforts to increase “trust” and “accountability” of police.

“When anybody in this country is not being treated equally under the law, that is a problem, and it’s my job as president to help solve it,” Obama said. He added, “We are not going to let up until we see a strengthening of the trust and strengthening of the accountability that exists between our communities and our law enforcement.”

Following the “die in” at Grand Central, demonstrations in New York moved to Times Square and Rockefeller Center, where police began shoving protesters and making arrests.

Another protest is scheduled for Thursday evening in downtown Manhattan.