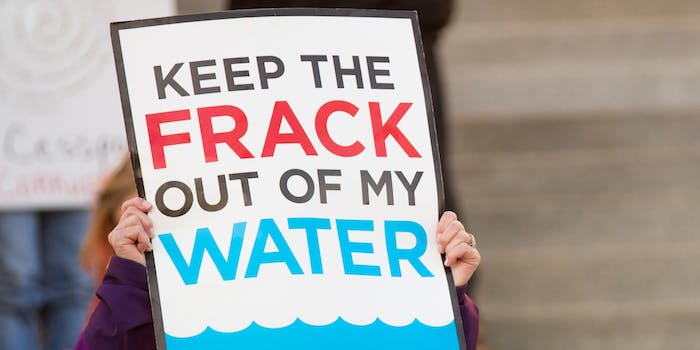 The report arrives just as EPA is set to be taken over by Trump's pro-fracking nominee.

Hydraulic fracking, a controversial method for reaching oil and gas locked deep underground, can contribute to drinking water contamination during all stages of the process, according to a new study released by the Environmental Protect Agency (EPA).

A previous iteration of the report, initially commissioned by Congress in 2010, found that while water contamination had occurred sporadically at well sites, there was “no evidence that fracking systemically contaminates water” supplies. That language has been removed from the EPA’s final report, however, with the agency’s scientists now concluding its prior assertion could not be “quantitatively supported,” as the New York Times reported on Wednesday.

The final report states that contamination is possible during every step of the fracking process, including, but not limited to: the process by which water is extracted before it is combined with fracking chemicals; when spills occur during the management of hydraulic fracturing fluids; and during the injection, discharge, and disposal phases.

The assessment is likely to become a hot topic at the Senate confirmation hearings of Scott Pruitt, the attorney general from Oklahoma, whom President-elect Donald Trump has named as his choice to run the EPA. Pruitt’s nomination has furthered belief that Trump will follow through on his campaign promise to roll back the Obama administration’s pro-climate policies.

Pruitt has previously sued the Obama administration over policies intended to reduce the country’s greenhouse gas emissions, and he claims the so-called “debate” over climate change is “far from settled,” a statement that puts the 48-year-old official entirely at odds with 97 percent or more of climate scientists published in peer-reviewed scientific journals.

In that regard, Pruitt appears to have been strategically chosen by the Trump transition team to kneecap the EPA rather than further its mission to “protect human health and the environment—air, water, and land.”

“The American people are tired of seeing billions of dollars drained from our economy due to unnecessary EPA regulations,” Pruitt said of his nomination, “and I intend to run this agency in a way that fosters both responsible protection of the environment and freedom for American businesses.”

Three months ago, Trump promised to do away with regulations limiting fracking, declaring, “The shale energy revolution will unleash massive wealth for America.”