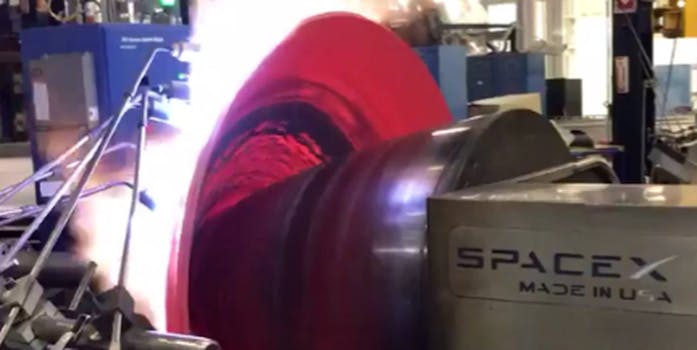 Anyone who has a soft spot for engineering, spacecrafts, or simply for awesome-looking white-hot flames just got a nice little surprise from SpaceX founder and CEO Elon Musk.

The enigmatic tech entrepreneur—who’s been pushing the quest for cost-efficient, long-distance space travel for years now—tweeted out a short video displaying how his rocket nozzles get made. And while what’s going on might be entirely opaque to the eyes of a layman, this much can be said conclusively: It looks damn impressive, if more than a little intimidating.

Musk’s efforts to launch a private rocket into space and ultimately to send a rocket to Mars with an eye toward future colonization has hit a number of stumbling blocks in recent years.

Namely, instances where test rockets have failed to properly launch, or as the case may be, have dramatically exploded pre-launch.

Given the scope of SpaceX’s goals, and how intricate and complex a feat rocket engineering is, it’s no surprise that he’d run into some trouble here and there. That said, at some point it’s important to cut down on the number of rockets visibly and explosively failing, because that does have a way of eating into the confidence of the people watching you.

To that end, Musk’s little glimpse behind the scenes is valuable, pulling back from the big picture to show just one piece of the precise manufacturing process that he clearly hopes will help crack this conundrum. Hopefully the next time a SpaceX rocket blasts off, it’ll cruise all the way to the heavens above—but that’ll depend on the durability and engineering of all the craft’s parts, like the fire-forged rocket nozzle shown above.