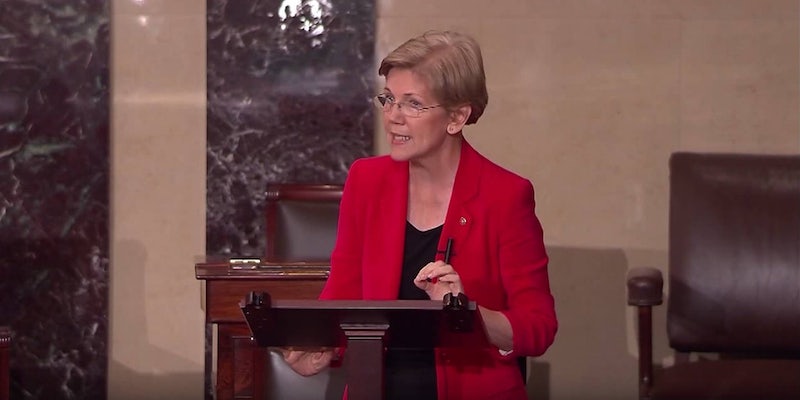 Elizabeth Warren to Planned Parenthood opponents: ‘Do you have any idea what year it is?’

When you hear her speech, you'll see that she's not holding back.

Sen. Elizabeth Warren called out some of her colleagues in a passionate speech defending Planned Parenthood shortly before a failed vote to defund it on Monday.

Conservatives have once again called on Congress to pull its $528 million in federal funding for Planned Parenthood after anti-abortion activists released a heavily edited video showing the group’s research director describing the process of preserving fetal tissue.

Warren, the Massachusetts Democrat who has captured the attention of her party’s progressive base in a way unseen since President Obama‘s 2008 campaign, denounced Republican senators for pushing the defunding measure in a speech on the Senate floor.

“Do you have any idea what year it is?” Warren asked them. “Did you fall down, hit your head, and think you woke up in the 1950s or the 1890s? Should we call for a doctor? Because I simply cannot believe that in the year 2015, the United States Senate would be spending its time trying to defund women’s health care centers. You know, on second thought, maybe I shouldn’t be that surprised. The Republicans have had a plan for years to strip away women’s rights to make choices over our own bodies.”

Abortions, which make up approximately 3 percent of Planned Parenthood’s medical services, are not eligible for the federal funds that the group receives except in the cases of incest, rape, or danger to the life of the mother. Federal dollars cover other patient services, such as cancer screenings, birth control, pregnancy tests, and STD testing. If Planned Parenthood were defunded, millions would lose access to reproductive healthcare.

The Senate bill to do just that failed by a vote of 53 to 46. It was seven votes short of the 60 required to move it forward. But the House will vote on legislation to strip federal funding after Congress returns from its summer break, and the debate will continue when Congress takes up bills funding the entire government for the next fiscal year. Several conservative senators have said they will push for a government shutdown to prevent continued funding for Planned Parenthood.