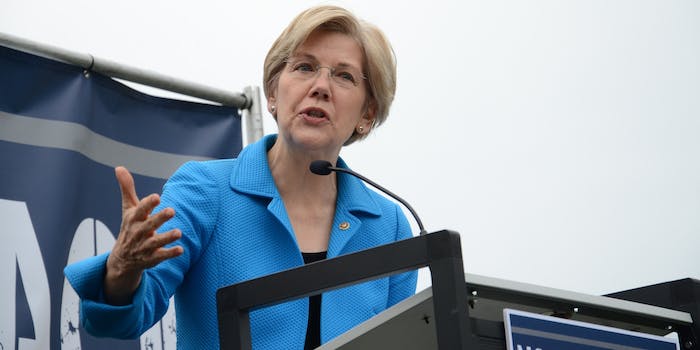 'I'm not thinking about another job,' she said.

Elizabeth Warren, the woman at the center of feverish speculation over who Hillary Clinton will pick as her running mate, did not rule out joining the likely Democratic nominee on the ticket.

“You know, this is something—we’ve got to get all of our nominations settled on the Democratic side,” the Massachusetts senator said in an interview with Mic. “For me, I’m going to keep doing my job every single day and I’m not thinking about another job.”

Warren has already been taking on a more visible role in the 2016 election, trading barbs on Twitter with presumptive Republican presidential nominee Donald Trump over the vast differences between their beliefs.

Warren is one of the most popular senators in the country, boasting a 64 percent approval rating from her constituents. She’s a regular face on television and online. And she is a leader of the progressive wing of the Democratic Party, a movement that is still powering Sen. Bernie Sanders (D-Vt.)’s longshot bid for the nomination.

Warren’s answer today is not definitive, of course. But by refusing to rule out joining Clinton on the ticket—something she could easily have done by now—she keeps herself in the conversation about possible vice-presidential picks.