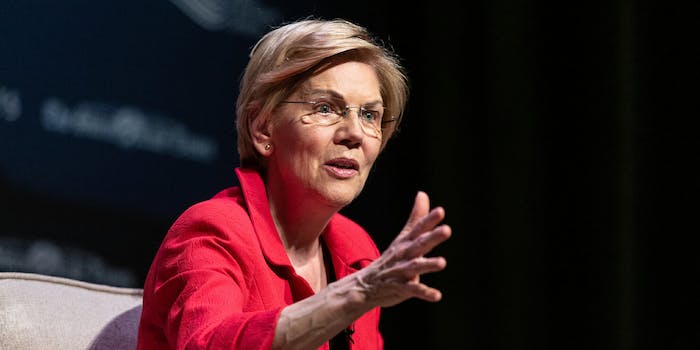 Warren calls for a massive overhaul of the country's elections.

Sen. Elizabeth Warren (D-Mass.) announced a plan to overhaul the country’s elections on Monday, adding to the numerous policy proposals the 2020 Democratic presidential hopeful has released in her campaign.

In the plan, which she unveiled in a post on Medium, Warren calls for making election day a federal holiday, replacing every voting machine in the country with up-to-date equipment, and having a uniform federal ballot.

Warren’s plan also calls for beefing up the country’s election security, including putting “all federal voting technology systems behind a security firewall like it’s Fort Knox.”

“It is time to make high-quality voting in the greatest democracy in the world easy, convenient, and professional. It’s time to secure our elections from all threats, foreign and domestic. It’s time to address election security, administration problems, and voter suppression,” the Massachusetts senator wrote.

The plan calls for an end of political gerrymandering, instead making states use independent election commissions to draw congressional districts.

“Our democracy is too important for it to be under-resourced and insecure,” Warren says in the post. “We need to do everything we can to make sure our elections are convenient, professional, and secure — and we should be willing to pay for it.”

You can read all of Warren’s election proposals here.