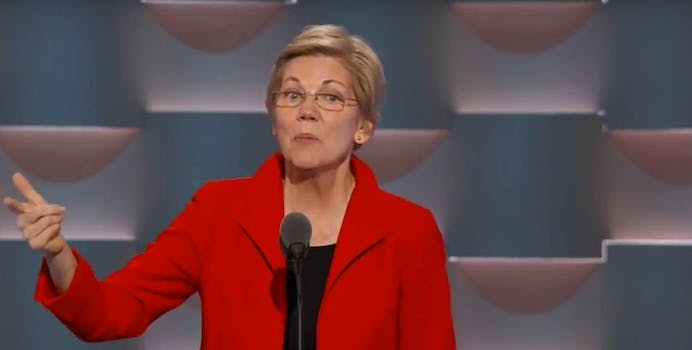 The senator from Massachusetts had a word or two to the wise.

Warren said Americans in 2016 had to pick between two sides. “On one side is a man who inherited a fortune from his father and kept it going by cheating people and by skipping out on debts,” said Warren regarding Trump. “A man that has never sacrificed anything for anyone. A man who cares only for himself, every minute, of every day.”

The senator from Massachusetts gave the keynote address on the convention’s opening night Monday during what was already a tough day for the scheduled speakers.

Delegates who supported Bernie Sanders booed and jeered through much of the evening’s speeches, including the likes of fellow Senator Cory Booker (D-N.J.) and actress Eva Longoria. There was a brief reprieve for First Lady Michelle Obama after some in the audience shushed the band of Bernie supporters that were about to deliver a chant.

Warren then said of Democratic nominee Hillary Clinton, “On the other side is one of the smartest, toughest, most tenacious people on this planet … A woman who fights for all of us and who’s strong enough to win those fights. We’re here today because our choice is Hillary Clinton. I’m with Hillary. “

The popular senator who was once floated as a potential Clinton running mate is still expected to play a crucial role in the Clinton campaign. Many Sanders supporters hoped that Warren would endorse the senator from Vermont. As a progressive champion and crusader against big banks, Warren is still favored by some who rail against the Democratic party establishment.

Warren called on Democrats to remember the values of the party. She reminded the audience that Democrats fought for health reform, environmental rules, and consumer protections against big banks. She railed against Trump as someone who rooted for the housing crash.

Warren’s speech was one of the few on Monday night that Trump attacked on Twitter. The Republican candidate called her “Pocahontas,” referring to when the senator claimed her distant Native American heritage in applications for college.

Elizabeth Warren, often referred to as Pocahontas, just misrepresented me and spoke glowingly about Crooked Hillary, who she always hated!

But Warren, on this night, had the last word.