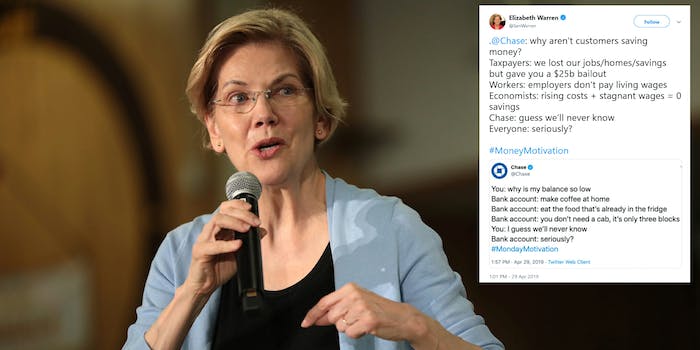 Warren, along with millions of others online, wasn't here for Chase's tweet.

Sen. Elizabeth Warren (D-Mass.), a 2020 Democratic presidential hopeful, mocked a tone-deaf tweet sent out by Chase Bank on Monday where it attempted to joke about people not being able to save money.

The bank sent out a tweet on Monday with an imagined conversation between “you” and your “bank account.” In the tweet, the bank account chastises people for buying coffee, going out for food, and using ride-hailing apps. The tweet stopped just short of falling into the avocado toast cliche.

The tweet was later deleted amid widespread criticism and the brand joked that it hoped “to get better at #MondayMotivation tweets.”

But, of course, the tweet lived on in screenshots and Warren got hold of one and shot back at the bank, citing the enormous bailout it received in the wake of the 2008 financial crisis.