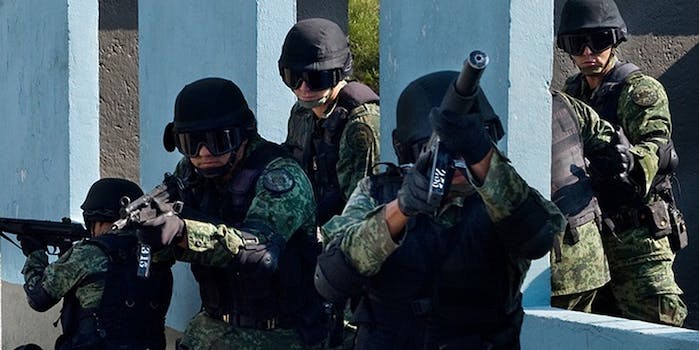 There's new video of the raid that resulted in the capture of the world's most infamous drug lord, El Chapo.

A newly released video shows part of the shootout that ultimately led to the capture of Mexican drug lord Joaquín “El Chapo” Guzmán.

The two-minute video shows the 4:30am raid on Guzmán’s hideout in Los Mochis, Mexico.

Guzmán famously escaped from a maximum-security prison in Mexico seven months ago—his second successful escape from a Mexican prison. He now faces extradition to the United States, a move that U.S. officials urged prior to his last escape.

The video, released by the Spanish-language TV news network Univision, shows Mexican Navy forces engaged in an intense firefight. They ultimately killed five of Guzmán’s associates during the raid.

According to CNN, one of the soldiers in the video screams, “They got me! They got me!” That soldier survived but was injured.

Toward the end of the video, soldiers throw grenades into a room. Guzmán had already escaped by slipping under a manhole cover; he was later apprehended after emerging and stealing a car.

In an interview with Sean Penn published in Rolling Stone, Guzmán, then still on the run, admitted for the first time to being the world’s biggest drug dealer.

“I supply more heroin, methamphetamine, cocaine and marijuana than anybody else in the world,” Guzmán said. “I have a fleet of submarines, airplanes, trucks and boats.”