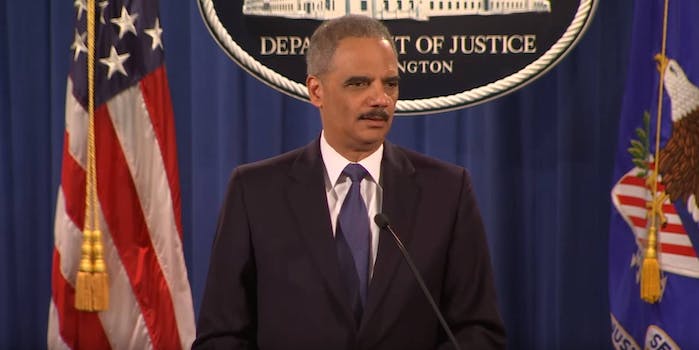 Holder prosecuted more whistleblowers than any other attorney general.

“We can certainly argue about the way in which Snowden did what he did, but I think that he actually performed a public service by raising the debate that we engaged in and by the changes that we made,” Holder, the government’s top lawyer from 2009 to 2015, said in an interview with President Obama‘s White House adviser David Axelrod for his podcast, The Axe Files.

“We had the capacity to do a whole range of things under [mass surveillance] programs,” Holder said, “but after a while, I remember sending memos to the president and asking, ‘Do we really need to do this, given the way in which we are focusing on people’s lives, and given the return that we were getting?’ Which was not, you know, I think, in any ways, substantial.”

Beginning on June 6, 2013, the Guardian, the Washington Post, and other U.S. and foreign news organizations published documents that revealed in startling detail the far-reaching surveillance programs of the NSA and its international counterparts, including Britain’s Government Communications Headquarters (GCHQ).

The Snowden revelations sparked a wave of diplomatic and popular protests against U.S. surveillance operations and prompted Congress to end one of the NSA’s bulk records-collection programs by enacting the first serious surveillance-reform law since Sept. 11, 2001.

Shortly after Snowden revealed his identity, Holder’s Justice Department charged him with violating the Espionage Act for, among other things, “willful communication of classified communications intelligence information to an unauthorized person.”

Although Holder admitted in the new interview that Snowden had done something valuable, he maintained that the manner in which he had done it was “inappropriate and illegal,” saying Snowden “maybe could have gone to Congress and done these kinds of things.”

This argument, widely advanced by senior administration officials and defenders of mass surveillance, has been criticized by transparency advocates who point to the government’s history of aggressively prosecuting, humiliating, and financially and reputationally ruining whistleblowers who go through the proper channels.

“I think there has to be a consequence for what he has done,” Holder said, “but … in deciding what an appropriate sentence should be, I think a judge could take into account the usefulness of having had that national debate.”

Holder’s latest comments aren’t a complete reversal from his previous stance. In July 2015, three months after leaving office, he admitted that Snowden’s leaks “spurred a necessary debate,” and in January 2014, while still in office, he floated the idea of a plea deal with Snowden to reduce what would otherwise be a lengthy prison sentence.

Holder’s discussion of Snowden begins at 51:08 in the episode.

The Snowden saga came amid an historic uptick in prosecutions of whistleblowers. President Obama and Attorney General Holder have relied on the Espionage Act to target whistleblowers eight times—more than all previous presidents combined.

Critics argue that the crusade against low-level leakers is hypocritical because high-ranking officials who leak classified information, including Gen. David Petraeus, are not charged.

Holder defended his Justice Department’s record on whistleblower cases, noting that two of the Obama-era prosecutions were based on work that began under President George W. Bush. He also said that prosecutors “turned away, probably, close to a hundred” cases that intelligence officials urged them to pursue.