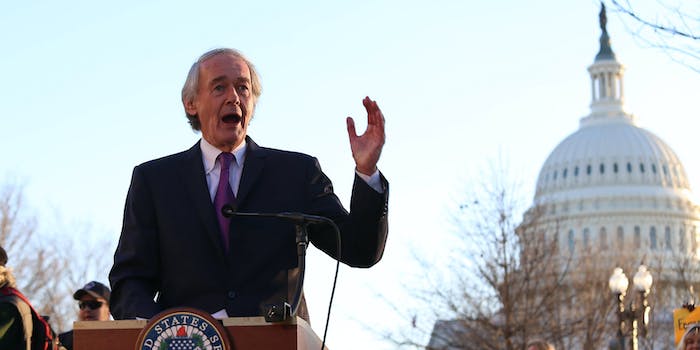 The 'Markeyverse' is about to be overjoyed.

The “Markeyverse” is about to be overjoyed: Sen. Ed Markey (D-Mass.) is projected to win the Massachusetts Democratic Senate primary, successfully fending off a challenge from Rep. Joe Kennedy III (D-Mass.)

The race was called for Markey around 9:20pm CT by Decision Desk HQ. WCVB-TV reported around the same time that Kennedy called Markey to concede the race.

The primary quickly became one of the most closely-watched races during this election cycle. Markey, a long-time member of Congress, initially trailed Kennedy in early polling, but an explosion of online support raised the profile of the 74-year-old senator.

But besides the online support, the election drew attention from progressive lawmakers like Rep. Alexandria Ocasio-Cortez (D-N.Y.), who backed Markey, and House Speaker Nancy Pelosi (D-Calif), who endorsed Kennedy.

Markey has been a champion for net neutrality and children’s data privacy issues and was a co-sponsor of the Green New Deal in the Senate.

“Tonight is more than just a celebration of an election, it is a celebration of a movement,” Markey tweeted late Tuesday. “Thank you to the thousands of grassroots supporters who organized around the principles that we believe in. We could not have done it without you.”

Markey’s win is certainly going to feel validating for the so-called “Markeyverse,” the massive online fandom the senator had collected over the course of the campaign.

The Massachusetts senator was backed by an army of meme and stan accounts on Twitter and TikTok that pushed for him. The support online seemed to reinforce polling that showed Markey having overwhelming support from voters between the ages of 18 and 29.

The senator also name dropped the “Markeyverse” during his victory speech.

Overall, polls showed the race between Markey and Kennedy to be close. However, recently polls seemed to show the incumbent senator breaking away. Real Clear Politics, which compiles numerous polls and generates an average, showed early Tuesday that Markey was leading Kennedy by 11.2 points.

Kennedy, in his concession speech, said he would “pledge my support” to Markey in the future.

“It was difficult at times between us, good elections often get heated,” he said. “But I’m grateful for the debates, his commitment to our commonwealth, and for the energy and enthusiasm that he brought to this race.”