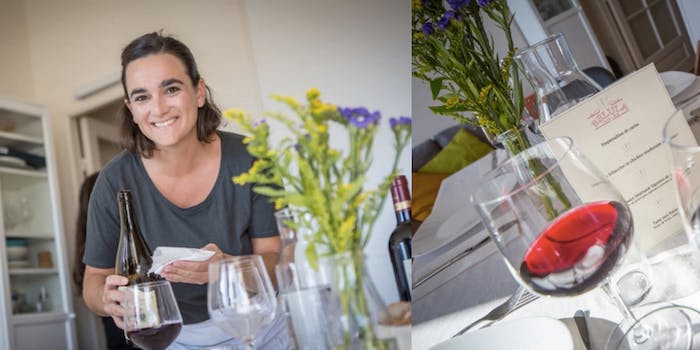 I turned up my coat to avoid the rain that had begun to fall, and stared at the Google Maps screen, trying and failing to not get lost among the criss-crossing streets of Paris’s 8th arrondissement. Traveling alone in foreign countries can be quite lonely and discombobulating, especially when the sun sets early and you’re caught in the rain without an umbrella.

But I was headed to a dinner party, hoping to shrug off the loneliness like my coat which had become too damp.

I punched in the door code that appeared in my email with the dinner party approval, and took the elevator up to a warm, cozy studio apartment. I was the last guest to arrive—others were awkwardly circled around a dinner table set for six in the center of the room, sipping wine and talking about what brought them all to Paris.

What brought us all to this particular apartment was a startup called EatWith. The service matches chefs from around the world with people interested in a home-cooked meal by a local resident. Dinner parties at the touch of a button. The company doesn’t have an app for guests yet, but its site lets you reserve a dinner spot anywhere from Atlanta, Ga. to Zaragoza, Spain.

Belén Gowland opened her home and her kitchen to us, an Argentinian chef who trained, and now lives, in Paris. The meal was called “Argentina Meets France And Beyond,” and cost $63 per person. From the dining table, you could look outside in the darkness and see the Eiffel Tower sparkling over the city.

I was the only solo guest, as two other American couples joined our hosts for a five-course meal that started with a pumpkin soup we sipped out of tiny glasses in one hand, while holding decadent Cabernet in the other. At first it was mildly uncomfortable to be standing around talking about Paris tourist destinations, but eventually we all warmed up to one another as dinner guests.

Gowland invited us to sit down, as she brought out the second course. Empanadas stuffed with pork, and a chimichurri sauce with a delicate garlic and parsley flavor, along with spices I didn’t recognize.

By this point the guests realized that we were all somehow connected to the tech industry—the couple from Brooklyn worked in startups, and the man from Hawaii was in Paris giving a talk on information security. Our host’s husband worked in IT, and, as a tech reporter, I’d written about everything they discussed, at least in some capacity.

I silently sipped my wine thinking about the irony of flying halfway across the world to escape Silicon Valley, only to find myself at a dinner party full of techies.

The next course was a butternut squash and parmesan pasta dish that tasted exactly like Autumn, and it was followed by salmon over lentils with bacon, a savory main course. We emptied two bottles of wine before the dessert course, an almond and pear tart with a crust that melted in my mouth with each bite.

The dinner party started at 8 p.m., and when the first guests left, it was almost 11 p.m. Gowland, finally left with nothing to prepare, opened another bottle of wine, and her husband, the couple from Brooklyn, and I are held out our glasses. Somehow we started talking about my adventure alone, and the woman from New York told me, “Say yes to everything.”

Technology connects people through things like Facebook posts and tweets, enabling communication to a large audience without saying much of anything at all. Relationships built on 140-characters are sometimes just as meaningful as those you have offline.

But technology can also be a conduit for real human interaction. EatWith gave me the opportunity to make friends in a city full of strangers, over a dinner cooked by a chef trained at Le Cordon Bleu. For those few hours, our phones remained in coat pockets, and despite the conversation including Google salaries and San Francisco rent, we were all connected by something more than the Internet.

It was well past midnight when I decided it was time to leave. The rain had stopped and my coat was dry, and I hugged Gowland, her husband, and the guests who were walking in the opposite direction. I thanked her for an amazing night, a dinner party at which I arrived as a stranger and left as a friend.