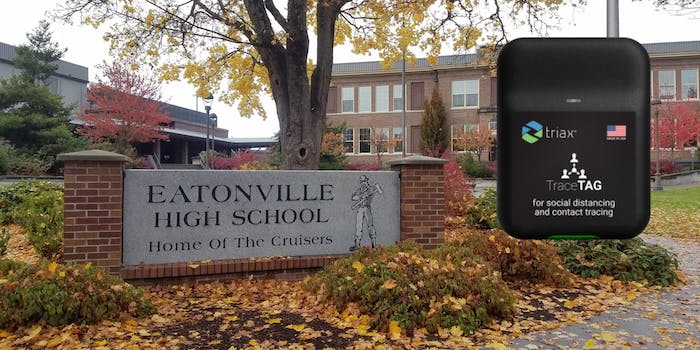 Update 11:12am CT: A spokesperson for Eatonville originally told the Daily Dot that trackers were entirely voluntary. But this morning, the school revised its statement to the Daily Dot to note that students could opt-out, but if they did they would not be allowed to participate in sports.

Eatonville told the Daily Dot that it has now shelved the devices until further notice.

A conservative media outlet sensationally claimed on Tuesday that a high school in Washington state was forcing unvaccinated students to wear ankle monitors. But numerous aspects of its jarring story are false.

An article from the Post Millennial asserted that unvaccinated teens at Eatonville High School had been singled out for electronic monitoring as part of a COVID-19 contact tracing program.

The article quickly gained widespread attention among opponents of coronavirus health measures and was even shared by Donald Trump Jr.

Yet the article’s own headline is contradicted in the very first paragraph, which notes that the program was aimed only at students involved in athletics regardless of vaccination status.

“A 15-year-old girl was allegedly forced to wear an ankle tracking monitor for volleyball practice at Eatonville High School in Washington state as a condition of participating in team sports,” the article begins. “This was required of both vaccinated and unvaccinated students.”

Speaking over the phone with the Daily Dot, a representative for the Eatonville School District stated that the program is entirely opt-in and requires signed permission slips from parents. The school also says it held a meeting with parents to inform them about the program. (Update: The school now says students could opt-out, but could not play sports if they did.)

The devices, known as TraceTags, are designed to monitor which students come into contact with one another only while playing sports. If a student at any point tests positive for COVID-19, the school can use the devices’ data to alert other students who may have been exposed.

The TraceTags are not specifically designed to be worn on the ankle and, according to the device’s manufacturer Triax, can be “affixed to any hardhat or worn on the body for proximity detection and contact tracing.”

The district representative noted that the controversy appears to have occurred after a new student attended a volleyball practice and was asked to wear one of the devices. The teen’s mother had reportedly not been made aware of the program and had not signed a permission slip either, signaling a possible oversight on behalf of the school.

On Tuesday, the Eatonville High School’s website published an FAQ section that answered questions about the program. The school referred to the devices as “proximity monitors for high contact and moderate indoor contact sports.”

“The monitors are for both staff (coaches) and students on the field, regardless of vaccination status,” the statement reads.

Gary Neal, the superintendent for the Eatonville School District, also published a letter addressing the concerns. Neal stated that the sensors were “only worn during participation in the sport” and would allow the school to quickly find any students who may have been exposed.

“This system prevents taking students out of school and athletics unnecessarily,” Neal added. “It allows us to keep more students engaged and involved in class as well as athletic activities. This is a top priority for staff and families here in Eatonville.”

It remains unclear if any objections were made to the program by actual students or parents before its spread online this week.