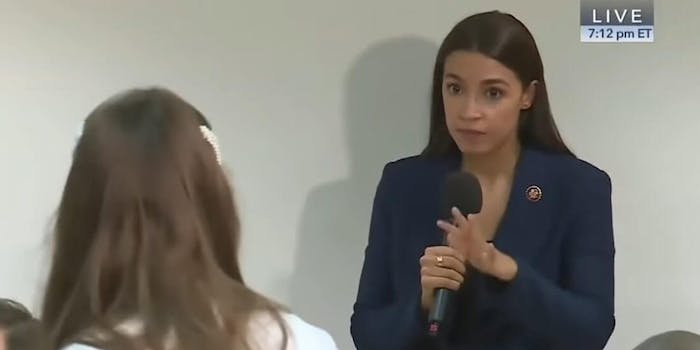 You can practically hear liberals' sighs of relief.

Near the end of Rep. Alexandria Ocasio-Cortez’s (D-N.Y.) town hall last night, a woman in the audience made a bizarre, criminal suggestion to combat climate change. “We’ve got to start eating babies,” she said, whipping off her jacket to reveal a shirt that read, “Save the planet/Eat the children.”

Ocasio-Cortez and the audience looked mostly stunned and uncomfortable as the woman rambled and said that people are “all pollutant,” and “even if we would bomb Russia, it’s not going to be enough” to fix the climate crisis. Finally, security escorted her out.

The outburst sent Twitter into high gear. #EatTheBabies was soon trending. Republicans wasted no time making a meal of the fact that the woman claimed to be a “climate activist” and Ocasio-Cortez supporter. The congresswoman fired back that the right-wing shouldn’t mock someone “who may have been suffering from a mental condition.”

Like so much on the right-wing internet, it turned out to be a hoax. An obscure group of conspiracy theorists who support Trump are now taking credit for the stunt.

Last night, the LaRouche PAC tweeted that it was behind it. The group, founded by conspiracy theorist Lyndon H. LaRouche four decades ago, is known for these types of political stunts, according to writer and broadcaster Matthew Sweet, who has studied and written a book about the “LaRouchians.”

According to Sweet, LaRouchians believe the Queen of England controls the drug trade, Prince Philip hopes to start a third world war, and that the Beatles were part of a secret British spy war against America. “They are, to use a technical term, nuts,” he tweeted. Previous targets of the group’s strange, though often effective, ploys include Michael Dukakis, Jane Fonda, and Henry Kissinger.

“They’ve been doing this since the ’70s,” Sweet told the Washington Post. “The tactic is you go to a political meeting and you create a disturbance that disrupts the meeting, and more importantly, that creates a kind of chaos.”

Sweet claims that the woman is a not a climate activist as she said but a member of the LaRouche group, which he describes as a “bizarre political cult.”

The group, Sweet says, supports Trump, “though Putin is their first love.”

The LaRouchies are now firm Trump supporters – though Putin is their first love. pic.twitter.com/lNKfTj5cti

Self-avowed LaRouchian Daniel Burke, an independent running for U.S. Senate in New Jersey, confirmed the group’s role in the stunt. A video posted on his campaign’s Facebook and Twitter pages features “an exclusive interview with a representative from ‘Eat the Children,’ the organization which intervened on AOC today at her town hall.”

“Earlier this week my friends and I went to NYU dressed up as Eat the Children! Now AOC gets a taste of Jonathan Swift, courtesy of LaRouche!” Burke captioned the video in one post. “Trump has retweeted! We’re over 2 Million views! Stop Green Genocide! It’s LUNACY!”

In the video, a woman—with a voice and accent that seem to match the woman from the town hall—interviews a man wearing a “Save the Planet/Eat the Children” shirt identical to the one worn during the town hall outburst. The man tells her that he’s taking orders for babies to serve for Thanksgiving dinner.

“Does Mark Carney eat babies too?” she asks. “Probably,” he responds. (Burke has made the clearly false accusation that Carney, governor of the Bank of England, bankrolls “Eat the Babies.”)

Commenting on Facebook this morning, Burke claimed that the video was “satire.”

After the incident was revealed as a hoax, conservatives shifted gears and began accusing Ocasio-Cortez of being complicit in the lunacy and criticizing her for not condemning the woman’s statements.

If you’re trying to determine whether the #EatTheBabies woman was a troll, you’re missing the point: @AOC allowing a woman to discuss bombing Russia & eating infants, without ONCE condemning those ideas, proves that Democrats are okay with violence—as long as it votes blue.

Ocasio-Cortez was not cowed by such criticisms. Friday morning, she tweeted, “Turns out the woman yelling was a Trump supporter. Doesn’t rule out potential mental issue (Drs do that) but good to know they were not in crisis. Earlier this year I was stalked & very nearly hurt by a disturbed person. I don’t take chances & immediately try to de-escalate.” Many agreed with the congresswoman’s actions.

Maybe, just maybe and this is a crazy idea but go with me on this…that the reason @AOC didn’t denounce the #EatTheBabies woman is because she realized this woman was having a mental break and knew that denouncing her might exacerbate the mental break so she listened instead. 🤷🏼‍♀️

"But AOC didn't disagree. She didn't condemn that lady!" #EatTheBabies

It's called being professional.

These reactions were mixed in with amusement, horror, and attempts to spread the truth about the hoax. Also present were plenty of Simpsons references.

Check to see why #EatTheBabies is trending
Me: Tf they doin over there pic.twitter.com/eCe87rMDg4

Thus far, no one has identified the woman by name.