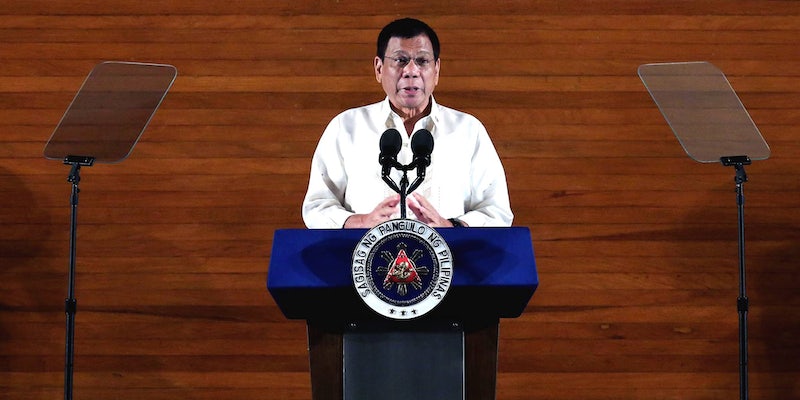 Rodrigo Duterte is known by some as 'the Trump of the East.'

Philippines President Rodrigo Duterte is trying to walk back his recent press conference comments in which he called President Obama a “son of a whore.” On Tuesday, he said he regrets that his words “came across as a personal attack on the U.S. president.”

Soon after the comments, Obama canceled a planned meeting with the Duterte. Now the Philippines president, quoted by a spokesperson, said that their meeting has been moved to a later date.

Duterte’s insult was in response to a reporter’s question about extrajudicial killings in the Philippines, with Duterte saying that Obama must be respectful during their meeting. “Son of a whore, I will curse you in that forum,” said Duterte on camera, prompting Obama to ask his aides whether a “constructive, productive conversation” was still possible.

Duterte is sometimes described as “the Trump of the East” due to his habit of making controversial remarks, so it seemed inevitable that the real Donald Trump would decide to weigh in.

China wouldn't provide a red carpet stairway from Air Force One and then Philippines President calls Obama "the son of a whore." Terrible!

As is often the case, it’s hard to parse exactly what Trump means in this tweet. The Air Force One comment refers to an incident at the G20 summit this weekend, when Obama had to exit his airplane from the back entrance instead of the traditional exit onto a red carpet—rumored to be an intentional diplomatic snub.

Trump said that if he was in Obama’s shoes, he’d leave the G20 summit in protest. The two situations aren’t exactly comparable, but Trump is probably insinuating that Obama isn’t tough enough with other world leaders—”toughness” being a common theme throughout Trump’s campaign.

Duterte claimed he isn’t looking for any beef, however. “I do not want to quarrel with him,” Duterte said of Obama on Monday at the Association of Southeast Asian Nations summit. “He’s the most powerful president of any country on the planet.”