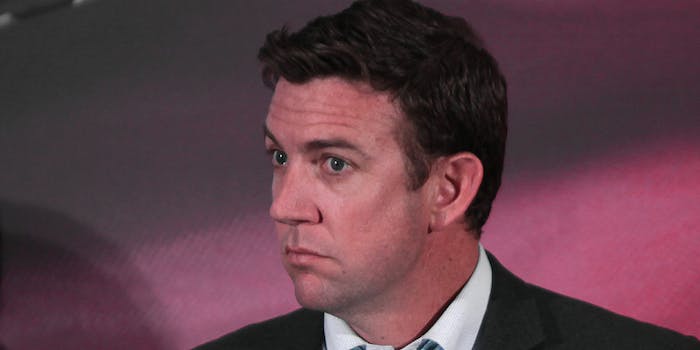 You gonna indict me too, too, bro?

Rep. Duncan Hunter (R-Calif.) is back in the news.

Seemingly dissatisfied for merely being known as the guy who vaped on the floor of Congress, who has been federally indicted along with his wife for illegally spending about $250,000 in campaign funds on themselves, and has taken pictures of dead combatants while serving with the Marines in the second Iraq War; last week Hunter admitted that he “killed probably hundreds of civilians” during a battle in Iraq.

His comments were made on the Barstool Sports Zero Blog Thirty podcast during a discussion about Navy SEAL Eddie Gallagher, who stands accused of war crimes for killing a wounded 15-year-old combatant, posing for pictures with the boy’s head, and shooting unarmed civilians.

Hunter has been extremely vocal about his desire to see Gallagher exonerated. President Donald Trump has indicated that he may pardon him before his trial.

After saying that he doesn’t believe that Gallagher stabbed the boy, who was receiving medical care from the American military after being wounded in an airstrike, Hunter says that even if he did, hey, that’s cool.

“Eddie Gallagher should still get a break, I think,” he says.

Zero Blog Thirty cohost Kate Mannion, an Afghanistan veteran who also served with the Marines, wasn’t having it. “I feel like it’s such a slippery slope and it goes against our honor so egregiously if that is the case…. I just have a hard time with it,” she says.

Subsequent to the interview, the hosts discuss Gallagher and Hunter’s alleged conduct in greater detail.

“If you are an artillery officer firing rounds into Fallujah with no regard at all for collateral damage and you are killing innocent civilians indiscriminately, I would say, yes, you should be charged,” one host says.

“I don’t care how vet-bro you are … it’s simply wrong to do these things,” Mannion says, later adding, “According to the [Department of Defense’s] war manual, any military dead should be treated with the same respect that we would be treated.”

Relevant portions of the ROE state: “Do not engage anyone who has surrendered or is out of battle due to sickness or wounds,” and “Do not fire into civilian populated areas or buildings unless the enemy is using them for military purposes or if necessary for your self-defense. Minimize collateral damage.”

To encourage compliance with these rules, the military distributed laminated cards to service personnel serving in Iraq beginning in 2003, so the congressman should be very well aware of their terms. Hunter claims to have killed civilians while serving there in 2004.

Reactions were swift and largely disgusted, including from former servicemembers, such as the editor of Task & Purpose Paul Szoldra.

“We fired hundreds of rounds into Fallujah, killed probably hundreds of civilians — probably killed women and children…do I get judged, too?” @Rep_Hunter

Absolutely you deserve being judged. Have you seen the staggering humanitarian consequences? https://t.co/zQjUMX6qYC

Duncan Hunter: Who among us has not committed a war crime https://t.co/FxUuKaEFDE

Americans often expect a higher standard from both our military and the people we elect to represent us.

But this is the man accused of buying a pair of shorts and trying to pass it off as a contribution to the Wounded Warriors, so perhaps it’s not so surprising that he continues to find new and interesting ways to horrify and disappoint.

Correction: This previously incorrectly stated that Gallagher is accused of killing an unarmed female civilian.