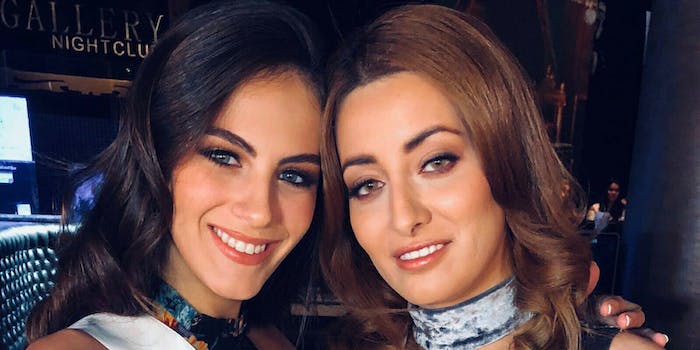 The two posed together to promote peace. Instead, it caused an uproar.

In 2017, taking a selfie with the wrong person can cause a lot of problems, apparently.

Relatives of Sarah Idan, the Iraqi contestant in the Miss Universe Pageant, had to flee their country to the U.S. after Idan posted a photo of herself with Adar Gandelsman, the Israeli contestant, according to the Times of Israel. Critics were also angry she modeled in a bikini.

“The two of those things together caused a mess for her back home where people made threats against her and her family that if she didn’t return home and take down the photos, they would remove her title, that they would kill her,” Gandelsman told Israeli TV. “Out of fear, they left Iraq at least until the situation calms down.”

Despite how the two contestants feel about one another, their countries are officially enemies. Some people, however, voiced their support of the photo.

You want to know when peace will come? When for all Arabs of the Middle East taking a selfie with a Jew doesn’t put you under threat of death. Good luck to the family of Miss Iraq; it should not be this way. https://t.co/vXuBTGVGTW

Idan does not regret posting the photos, Gandelsman said, because it was done to promote peace in the Middle East.

“She did it so that people can understand that it’s possible to live together,” she said.

“I want to stress that the purpose of the picture was only to express hope and desire for peace between the two countries,” Idan wrote in Arabic. “The photo does not signal support for the government of Israel and does not mean I agree or accept its policies in the Arab homeland.”

Idan went on to apologize “to all those who consider [the picture] harmful to the Palestinian cause.”

Update 8:35am CT, Dec. 19: In an interview with CNN, Idan provided more details about the aftermath of the selfie. Idan said the director of the Miss Iraq Organization threatened to strip her of her title if she didn’t remove the selfie from the internet and that the government hasn’t provided her any support in the aftermath. Miss Universe also wiped all her bikini photos off the internet.

Idan also told CNN that even though she has U.S. and Iraqi dual citizenship, she was told by the passport office that she would need to reapply for the national ID she needed to get her Iraqi passport renewed. Idan has been in the U.S. for the Miss Universe pageant events and she said she’s afraid to travel back to Iraq.