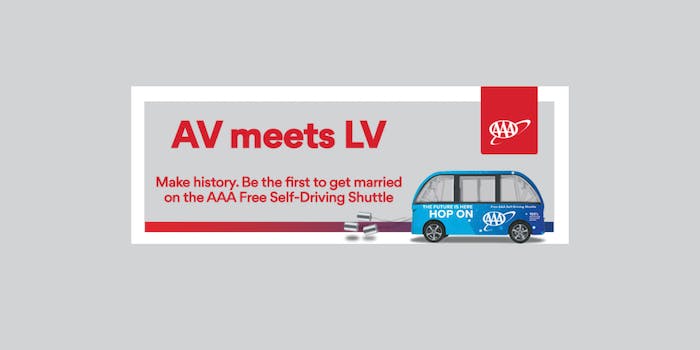 Please don’t get married in this driverless vehicle in Vegas

AAA is running a promotion to plan your 'wedding of the future.'

Las Vegas isn’t short on wedding venues, but apparently it’s gaining one more unusual option: a driverless shuttle. And AAA, which launched a driverless shuttle program in the city, is currently holding an essay contest to give one lucky couple the opportunity to be first to get hitched in one of its vehicles. For somebody out there, it might make for the perfect “wedding.”

The company has details of the promotion available on its website. Basically, you’ve got to fill in you and your spouse-to-be’s personal information (name, age, address), upload a photo of the two of you, and then write a short, 400-word-or-less essay. You’re supposed to write about a road trip you’ve shared, and how an autonomous vehicle could have changed that experience.

“Self-driving cars will change the way we travel the world, and like any good marriage, it’s going to take time, love and a lot of collaboration and trust to get this technology safely implemented into our transportation system,” AAA Nevada spokesman Michael Blasky told the Las Vegas Review-Journal.

There is one caveat: Driverless shuttle wedding hopefuls need to be Nevada residents ages 21 or older to participate.

So far, more than 23,000 people have hopped on the free vans for a trip since their debut.

If you win, your wedding will take place June 30 in Downtown Las Vegas Container Park. The shuttle will be stationary for the ceremony, then make two loops around the park. AAA is calling it a “wedding of the future,” but no, this is not going to be Pinterest-worthy wedding trend—even if it does catch on among Vegas-destined couples.