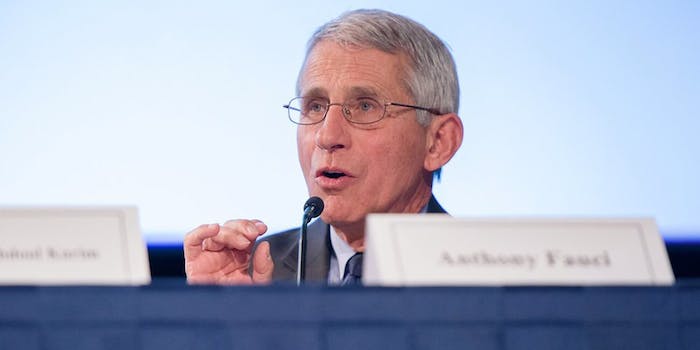 A character in this bestselling 1990s romance novel is based on Dr. Fauci

The author met Dr. Fauci and 'just fell in love with him.'

The author of a popular romance novel from nearly two decades ago has come forward to reveal that one of the main characters is based on Dr. Anthony Fauci.

Sally Quinn, who in 1991 released the bestselling book Happy Endings, told Washingtonian magazine that the character arose after meeting Fauci at a function in D.C.

“I just fell in love with him. Usually those dinners, you make polite conversation, and that’s it,” Quinn said. “But we had this intense conversation, personal conversation. I thought, ‘Wow, this guy is amazing.’”

That interaction led Quinn to create Michael Lanzer, a National Institutes of Health (NIH) scientist working on a therapy for AIDS in the book. Fauci famously did similar work during the ’90s while at the National Institute of Allergy and Infectious Diseases (NIAID).

Lanzer, who in the book is treating the president’s secret AIDS diagnosis, becomes the love interest of former First Lady Sadie Grey.

Quinn says the Fauci-inspired character was a perfect fit for Grey.

“What kind of person would she be in love with? It would not be somebody from a great family or with a lot of money,” Quinn said. “But it would be somebody who was really brilliant, and compassionate, and kind, and decent, and honest. All of those things—and sexy.”

Lanzer’s idea of romance, according to Quinn, were such memorable lines as: “You are like a tumor in my brain which is getting larger and larger each day.”

Quinn even revealed that at some point she had made Fauci aware of his influence on the book.

“He just thought it was funny,” Quinn said. “I think he was a little embarrassed.”