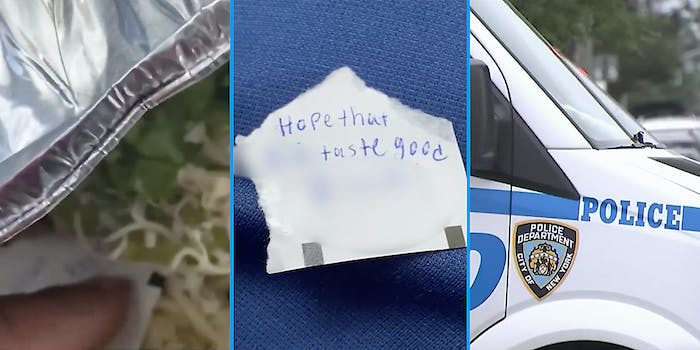 A video posted on Facebook showed a DoorDash delivery driver placing a note, with his bare hands, in food ordered by an NYPD officer.

On Monday, a video posted on Facebook showed a DoorDash delivery driver placing a note, with his bare hands, inside food ordered by an NYPD officer.

The note which was put in the Chipotle food container says, “Hope that dik [sic] taste good bitch,” implying he might have touched something else prior to placing the note in there.

According to NBC New York, the video was posted by a Facebook user named “So Certified.” The user claimed to have been the one who put the note in the officer’s food. In the comments, he said: “This is a fb public announcement no I do not violate ppl food like that as u can c that was personal that’s All We At War.”

It was followed by several laughing emojis.

The incident took place between 2-3pm ET on Monday afternoon, according to NBC New York. The food was delivered to a Brooklyn precinct.

DoorDash made a statement to NBC New York saying, “This behavior is absolutely unacceptable and has no place in our community. We take the trust and respect of merchants, customers, and Dashers extremely seriously. We have deactivated the Dasher and have reached out to the customer involved.”

Chipotle also made a statement to NBC, calling the driver’s actions “inexcusable.”

The Daily Dot reached out to the Brooklyn precinct as well, but have not yet received comment.