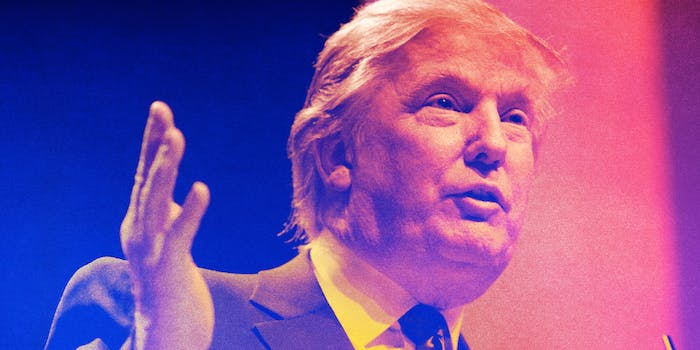 Donald Trump is winning over the white supremacist vote

Who exactly is Donald Trump?

The answer to this seemingly simple question eludes everyone from pundits and pollsters to the Republican establishment, which is scrambling to untangle the 2016 GOP frontrunner’s surging appeal.

But there’s one political tribe that has started to figure Trump out: white supremacists. And an increasing number of them like what they see.

On one hand, Trump is a billionaire product of New York City, born wealthy, with little loyalty to one political party (he’s switched  almost half a dozen times). He has converted Jewish children and grandchildren whom he loves. He boasts of his close ties and “great friends” in Israel. None of this adds up to a recipe for support from white supremacists, most of whom are aggressively antisemitic.

“If Mr. Trump loses, this could be the last chance whites have to vote for a president who could actually do something useful for them.”

On Stormfront, the iconic Internet home of American white supremacy, the debate over Trump has been raging for months. More and more, however, it looks like Trump is winning.

“Trump is no white nationalist,” one member of Stormfront wrote on Monday. “He has explicitly defended [J]ews and blacks, and made his career out of accepting [J]ewish money to get rich.”

One of Trump’s many Stormfront supporters jumped to his defense within minutes.

“First off, he isn’t [a white nationalist],” a user named A Germanic American argued. “But his immigration policies would help whites tremendously.”

Trump’s ties to American Jews and Israel once helped to disqualify him from white nationalist support. Today, the sheer gravity of his immigration platform sucks in energized supremacist voters. For them, the man once called a “Jew lover” is now the refreshing leading light of 2016.

“There will never be another campaign like this one,” Taylor wrote. “If Mr. Trump loses, this could be the last chance whites have to vote for a president who could actually do something useful for them and for their country.”

The white supremacist adulation of Trump’s immigration policy began with the official launch of his campaign.

If you put aside the fact that immigrants, including Mexicans, commit crime at a lower rate than native-born Americans, it’s not hard to understand how this line resonated with so many white supremacists and nationalists. The certain, undisguised, and aggressive blame of immigrants contrasts sharply even with many others on the right wing of American politics.

Even if Trump’s often plainly wrong as far as the facts go, no one else is talking as loudly and boldly about immigrants as he is. No one else is addressing so directly the issue that so many Americans feel is at the core of the country’s perceived decline.

“More than any of his words, the testosterone of The Donald is what is appealing to people,” Andrew Anglin, founder of the white nationalist magazine Daily Stormer, wrote this week. “When he says ‘excuse me,’ he might as well be punching these fags in the stomach.”

Trump’s official position paper on “immigration reform that will make America great again” is commonly linked to by supremacists and cited as a victory.

The billionaire’s positions include building a massive wall and making Mexico pay for it, tripling the size of the federal force going after illegal immigrants, mandatory deportation of all illegal immigrants, a requirement to hire American citizens first, and the end of birthright citizenship.

Meanwhile, Trump’s biggest rival is married to a Mexican immigrant. Jeb Bush, the former governor of Florida, went to the southern border this week and denounced Trump’s plan in Spanish. The move inspired a wave of anger throughout the online world of white nationalism.

This is par for the course when establishment Republicans like Bush push back against Trump. This week, the rumor that Trump would be banned from future Republican debates raised the ire of supremacists once again: “This will likely just make him popular,” one Stormfronter wrote. “How could anyone even stomach another Bush?”

David Duke, a former Ku Klux Klan grand wizard and an icon in white nationalism, called Trump the “best of the lot” due largely to his immigration policy. (Trump later brushed off Duke’s words of support, telling Bloomberg reporters, “I don’t need his endorsement; I certainly wouldn’t want his endorsement. I don’t need anyone’s endorsement.”)

Duke’s only problem with Trump boils down to the same question many white supremacists are asking: Can the leading GOP candidate be trusted given his ties to Israel?

The attention from white supremacists extends beyond cyberspace. Earlier this week, “white power!” was shouted multiple times from the stands of a Trump event in Alabama. And last week, a pair of brothers from Boston brutally beat an Hispanic homeless man thanks in part of Trump’s anti-immigrant rhetoric, police said. In response to the attack, Trump said, “I will say that people who are following me are very passionate. They love this country, and they want this country to be great again. They are passionate.”

Still, the white supremacist support for Trump is far from unanimous.

Trump’s lifelong closeness with the Jewish community is a step too far for many of the supremacists who can’t stomach it, even if Trump largely aligns with them on views of immigrants from non-European nations.

Trump’s pro-life position is in close agreement with most conservatives, but even that found some critics in the supremacist community: “I could never vote for someone who would force me to have a black rapist’s child,” a Canadian woman wrote. A few other supremacists stepped up to agree.

Then again, Trump’s insistence on pulling the Confederate flag from government buildings and putting it in museums receives surprisingly little attention in the supremacist community, even as many of his vocal supporters have waving Confederate flags in their online profiles.

All that, however, is background noise. Up front and center, Trump is rising.

“Am I the only one who deeply mistrusts Trump?,” another supremacist skeptic asked on Stormfront. “Didn’t people had hope in Reagan and the powerful [white Anglo-Saxon protestant] Bushes? And see what happened! Trump sold even two of his children to Jews for money! So, how can you not expect that he’ll not sell America to the Jews?”

An answer came quick and to the point from a white supremacist Trump supporter.