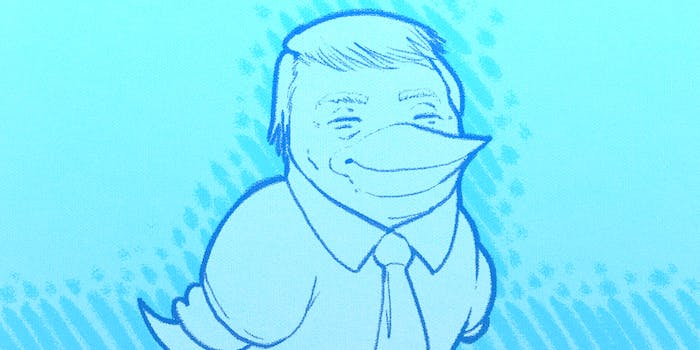 Donald Trump misread a Warren Buffett quote as an endorsement

Don't believe everything you read on the Internet.

Buffett, a well-know supporter of former Secretary of State Hillary Clinton, told CNBC on Monday that he expected Trump’s campaign to last for a long time despite Trump’s string of controversial statements. “I wouldn’t be surprised if [Trump] maintained a quite a solid base for some time,” Buffett said. Newsmax then ran with the story under the headline “Warren Buffett: Trump’s Support Is Here to Stay.”

Trump presidential adviser Dan Scavino, who served as executive vice president of Trump’s company for 10 years, evidently didn’t understand that the Newsmax headline wasn’t a quote, and that it was taken out of context. He tweeted a graphic in which he misspelled Buffett’s surname and positioned the Newsmax headline as both a quote and an endorsement. (An archived version of the tweet is available here in case the original is deleted.)

To Trump, the promise of counting the world’s third-wealthiest man among his supporters was too good to fact-check.

Buffett’s best-known contribution to American politics was inspiring the “Buffett Rule,” a tax-code change proposed by President Barack Obama that would increase the tax burden on the wealthiest 0.3 percent of Americans. Buffett called for people in his income bracket to pay more in taxes after highlighting the fact that he payed a lower effective tax rate than his secretary.