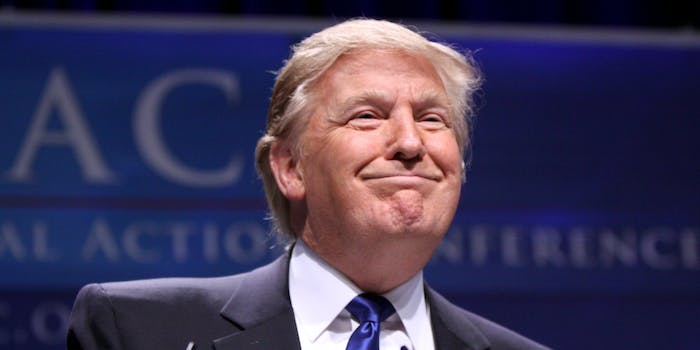 The stock footage is available for purchase.

Ads for President Donald Trump and his 2020 reelection campaign used stock footage models, portraying them as supporters, according to a new report.

The Associated Press reports that the Trump Make America Great Again Committee was behind the ads—which were posted on Trump’s YouTube page and ran on Facebook. They claim to show testimonials of alleged supporters, however, the ads use stock footage models.

The ads do briefly flash a disclaimer that they are actor portrayals of “actual testimonial.”

In one of the ads “AJ From Texas” says that he was a “lifelong Democrat” but believes that a nation “must secure its borders.”

In another ad, “Tracey From Florida” says Trump is doing a “great job” and that she “could not ask for a better president of the United States of America.”

“Tracey” is a stock footage model, and the video that appears in the ad is available to license on iStock, which is owned by Getty Images. The AP reports “Tracey” has been used in a number of different photos and videos for companies in other countries.

The ads are part of a staggering amount that Trump’s campaign and associated entities have pushed out in recent months.

As the Associated Press puts it:

The Trump Make America Great Again Committee, which was behind the testimonial videos, is by far the biggest spender on political Facebook advertising, shelling out more than $2.7 million on 27,735 ads in the last 90 days alone, according to the social network’s running database of campaign ad spending. That’s in addition to the more than $1 million spent on more than 14,500 ads in the same period by Donald J. Trump for President Inc.

You can read all of the Associated Press’ report here.