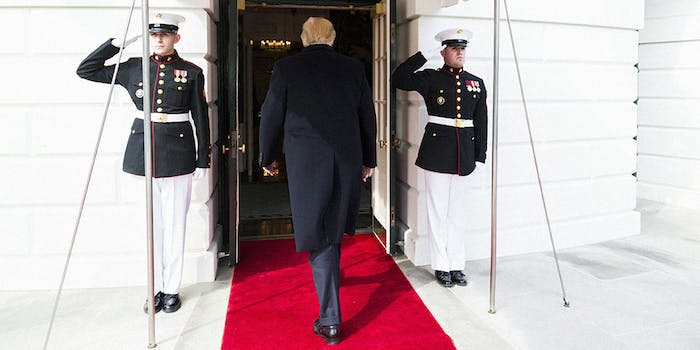 A president prone to hyperbole may have made his most absurd statement ever.

It appears the latest developments in the ongoing Russia controversy are finally starting to get to President Donald Trump.

On Wednesday evening, news broke that the Justice Department would appoint former FBI Director Robert Mueller as special counsel to lead an investigation into the Trump campaign’s ties to Russia.

When it was announced, the president put out a statement welcoming the investigation.

“[A] thorough investigation will confirm what we already know—there was no collusion between my campaign and any foreign entity,” the statement read. “I look forward to this matter concluding quickly. In the meantime, I will never stop fighting for the people and the issues that matter most to the future of our country.”

But this morning, after news broke that former national security adviser Michael Flynn attempt to develop a back channel to Russian President Vladimir Putin during the campaign, the president tweeted that the investigation was a “witch hunt.”

But not just any “witch hunt”—the “single greatest” witch hunt in American politics.

This is the single greatest witch hunt of a politician in American history!

Trump knows a thing or two about political witch hunts. Prior to becoming president, he spent years attempting to discredit the citizenship of former President Barack Obama. And he ran against Hillary Clinton, who faced multiple investigations into the Sept. 11, 2012 attack on a U.S. diplomatic compound in Benghazi, Libya, which left two Americans dead. The House committee dedicated to investigating Benghazi ultimately found no wrongdoing by Clinton.

On Wednesday, during his commencement address to graduates of the United States Coast Guard Academy, Trump declared himself the most victimized politician in the history of politics.

As the president is wont to do, his first tweet, with the misspelled version of ‘counsel,’ came after Fox & Friends was detailing scandals of the Obama administration.

7.26 – Fox News: "There was no calls for impeachment, no calls investigations" over IRS/Fast & Furious scandals, Clinton

David Covucci is the senior politics and technology editor at the Daily Dot, covering the nexus between Washington and Silicon Valley. His work has appeared in Vice, the Huffington Post, Jezebel, Gothamist, and other publications. He is particularly interested in hearing any tips you have. Reach out at dcovucci[email protected]