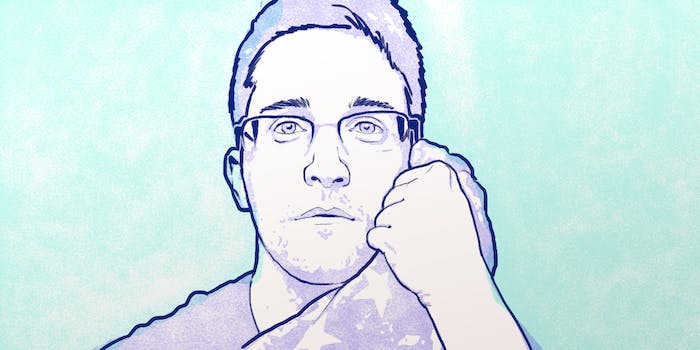 He's right for all the wrong reasons.

Edward Snowden is a Russian spy, according to Republican front-runner Donald Trump.

The GOP debate moment marked the climax of a heated sequence in which candidates took turns criticizing Snowden, who in 2013 leaked a massive trove of secret NSA documents to the press.

After Sen. Ted Cruz (R-Texas) said Snowden was guilty of treason, a crime punishable by death, Trump jumped in to claim he criticized Snowden earlier and in harsher terms than anyone else.

“Edward Snowden is a spy, and if Russia respected us they would have sent him back immediately,” Trump said.

Snowden has been in Russia since 2013, after the U.S. revoked his passport, eliminating his ability to travel internationally. He’s stated his original goal was to reach Ecuador.

In May 2014, two spies—one American, one Russian—said Snowden was a spy for Russia. But Snowden—who a day later told NBC that he “was trained as a spy” for the U.S. government—had preempted allegations about his allegiance to foreign governments by claiming that the U.S. intentionally trapped him in Russia to claim he was covertly working for the Kremlin.

“I was ticketed for onward travel via Havana—a planeload of reporters documented the seat I was supposed to be in—but the State Department decided they wanted me in Moscow, and cancelled my passport,” Snowden said in February 2014. He argued the U.S. wanted him there so “they could say, ‘He’s a Russian spy.’”