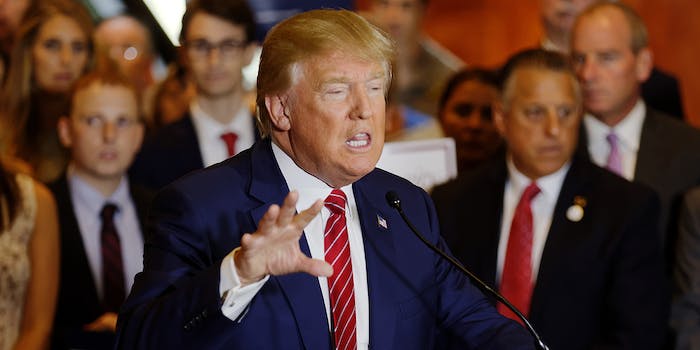 Brace yourself, Trump overload is coming.

If knowledge is power, then Donald Trump just went nuclear.

Until now, the RNC has not allowed Trump to use their voter database, though it is not entirely clear why. (Maybe this?) Armed with the RNC data, Trump will be able to target any of the more than 200 million voters reportedly included in the database in an effort to get them out to the polls.

The RNC’s agreement with Trump also means his campaign will bolster the database with new information on Trump supporters who many not have traditionally voted Republican.

So, what do these databases include? A recent leak of one voter database, which included the records of some 191 million Americans, included names, email addresses, home addresses, sex, ethnicity, party affiliation, and whether someone voted in past general and primary elections.

Data can make or break campaigns. Thanks in large part to the technology efforts of Barack Obama‘s campaigns in 2008 and 2012, the GOP had, at least until recently, lagged far behind in the voter-data department. As the Los Angeles Times reported in July, the Republican data efforts may still be lacking compared to their partisan competitors.

Even for Trump, who has long held the top Republican spot in the majority of national polls, the data could mean the difference between winning and losing. While Trump leads in nationally by an average of 17 points, according to Real Clear Politics, the businessman and reality TV star trails Sen. Ted Cruz (R-Texas) by nearly 3 points in Iowa, where voters are scheduled to cast the first votes of the 2016 election on Feb. 1. In New Hampshire, the second state to vote in the primaries, Trump leads by an average of nearly 14 points.

Trump’s access to the RNC database coincides with a major TV advertising blitz, according to Fox News, which reports that his campaign will spend at least $2 million a week on campaign ads—up from $0 so far this year.

What does that mean for Americans? Well, love him or hate him, we’re all about to get a double dose of The Donald.