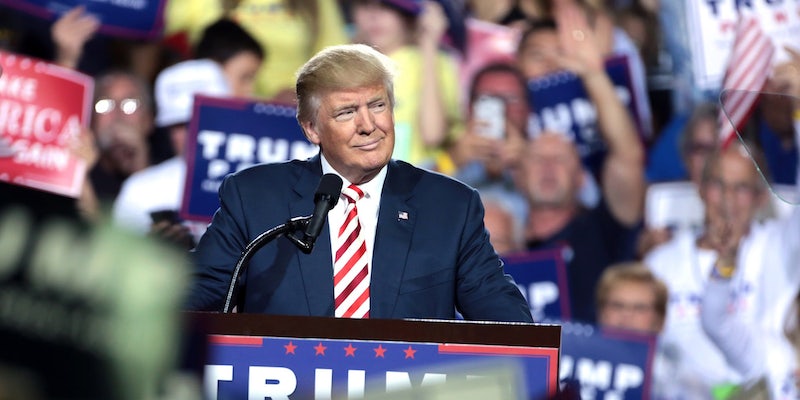 A day after much of the country protested his executive order to ban travel to the U.S. for refugees and citizens of seven Muslim-majority countries, after Iran blocked U.S. citizens in response, and after a federal court halted his plan, President Donald Trump took to Twitter Sunday morning to respond.

His first order of business: blast the New York Times for the second-straight day.

Somebody with aptitude and conviction should buy the FAKE NEWS and failing @nytimes and either run it correctly or let it fold with dignity!

On Saturday, Trump tweeted the following: “The failing @nytimes has been wrong about me from the very beginning. Said I would lose the primaries, then the general election. FAKE NEWS! … Thr (sic) coverage about me in the @nytimes and the @washingtonpost gas (sic) been so false and angry that the times actually apologized to its….. dwindling subscribers and readers.They got me wrong right from the beginning and still have not changed course, and never will. DISHONEST.”

That was not true. The New York Times didn’t apologize for anything, and actually, business has been quite good for the paper of record.

On Saturday, the Times’s editorial board published an op-ed with the headline, “Donald Trump’s Muslim Ban Is Cowardly and Dangerous,” which might have raised his ire.

On Sunday, this was how the Times responded again to Trump’s tweet.

"The Times is, it’s a great, great American jewel.” That’s what @realDonaldTrump
told us in person. Subscribe!https://t.co/N02IkCNBEo pic.twitter.com/ngmNaCspmf

Seven minutes after his initial tweet Sunday, Trump (sort of) turned his attention to the controversy at hand.

Our country needs strong borders and extreme vetting, NOW. Look what is happening all over Europe and, indeed, the world – a horrible mess!

As we’ve seen in the past, this probably won’t be the last time Trump tweets Sunday. Until then, keep up with what Trump tweets every day and the context that oftentimes is much needed when he lets loose on a rant.