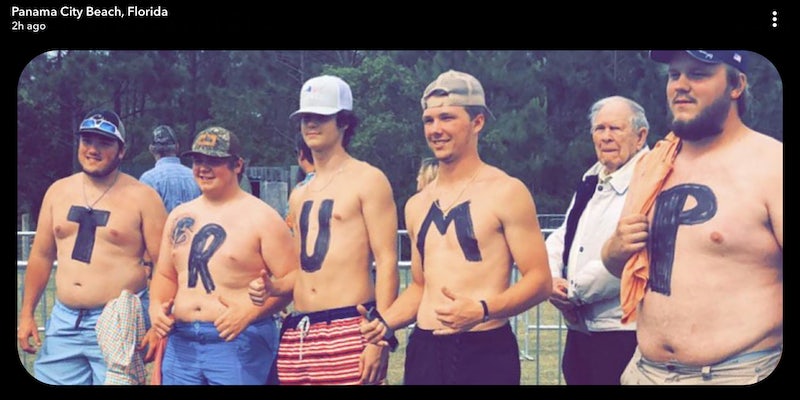 It's even more Florida than you might have expected.

President Donald Trump’s Wednesday night rally promised to be a train wreck of everything glorious about his events.

The rally was held in Panama City, Florida—an area that’s often deemed the Redneck Riviera—and Trump is wrapped up in his most intense battle with Congress since he ascended into the Oval Office, giving him ample ammunition to fire away from behind the podium.

As an added bonus, the charismatic Congressman Matt Gaetz (R-Fl.) spoke as a sort of undercard. This happened just after news broke that the Florida bar association said they would continue to investigate Gaetz after he intimidated former Trump fixer Michael Cohen on Twitter.

Sending a reporter to a Trump rally is a costly exercise that generally doesn’t seem to yield much fresh reporting. But in the social media age, that’s hardly necessary.

Over the past few months, I’ve been tracking Trump’s rallies via the Snapchat map. His rally-goers post photos and videos of the events that consistently offer a more entertaining lens than whatever CNN is filming because the crowd is as much a part of the rallies as the president himself. I texted one of my buddies who is an outspoken admirer of the president, asking what he expects when attending a Trump rally and he wrote back Trump is God.

And the Snapchat story from Panama City did not disappoint. It wasn’t hard to find the rally on the map, there were so many Snapchats that the location was glowing bright red and there was even a “moment” created.

One of the first images I came across was a photo of five shirtless men lined up with “TRUMP” written across their stomachs. They were grinning widely and a few of them flashed thumbs-up signs.

A few moments later, I came across somebody filming himself and the rally with the caption “SUCK OUR DICKS JOE BIDEN.”

So things were off to a great start. Most of the good Snapchats usually land before the president has taken the stage and this one was no different. Like this clip of a woman singing along to the Backstreet Boys as she waited for the president to take the stage.

She wasn’t the only one who was getting into the music at the rally. There’s this guy who dances along to “We Are the Champions” by Queen. And the Snapchat caption— “DUDE IS LIT AF”—just makes it a little better.

At another point in the story, I spotted a familiar character—Trisha Hope. Hope is popular in certain circles for putting together a book of Trump’s tweets and stamping her name on the front. Hope, who is from Texas, tweeted last night that she was at the rally. Even in the Trump era, her grift is impressive; she sells the books for $35 and she’s putting out one for each year the president is in the Oval Office.

Unfortunately, the actual clips of the president speaking are hardly impressive. Most of them are just blurry videos of the commander-in-chief. However, I did come across one interesting little nugget—apparently, the Republican National Committee bought a Snapchat filter for the event. Here’s a look at that.

Watching the Snapchat stories for Trump rallies is often something of a game of “spot the QAnon people” as the conspiracy theorists often show up wearing the gear to the president’s rallies.

However, I didn’t spot any “Q” t-shirts or signs on the Snapchat story from Wednesday’s rally. But that’s not because they weren’t there—HuffPost reporter Christopher Mathais tweeted that he was “already stunned by the number of Qanon folks” at the rally.

But, in the end, the Panama City Snapchat story was one of the better ones that I’ve seen in the past year or so that I’ve been watching these.

And it tracks with polls of the president’s support within his own party. The people who love Trump REALLY love Trump.