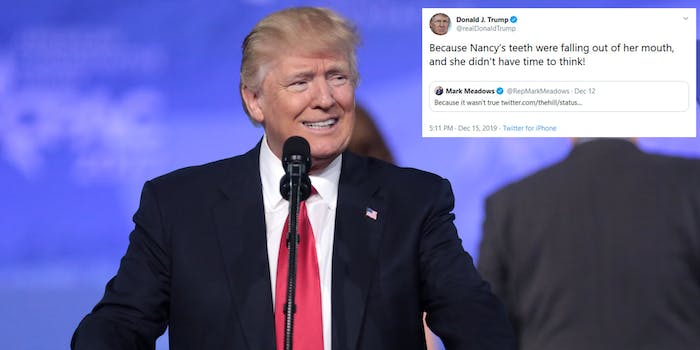 Is Trump projecting about his own teeth with this Nancy Pelosi tweet?

The tweet got mocked, given Trump's own struggles with speaking.

President Donald Trump came up with a new way to attack House Speaker Nancy Pelosi: by going after her teeth.

The president continued his Twitter attacks against the Democrat on Sunday night when he responded to a tweet from Rep. Mark Meadows (R-N.C.), where he posted a clip of Pelosi answering a reporter’s question about not including bribery in the articles of impeachment.

Meadows wrote that bribery was not included in the articles of impeachment because it “wasn’t true.”

Trump decided to weigh in on the clip.

“Because Nancy’s teeth were falling out of her mouth, and she didn’t have time to think!” the president tweeted on Sunday evening.

Because Nancy’s teeth were falling out of her mouth, and she didn’t have time to think! https://t.co/rx3pcyofip

Trump continued shortly after: “Congressional Do Nothing Democrats are being absolutely decimated in their districts on the subject of the Impeachment Hoax. People that voted for them are literally screaming in their faces. Crazy Nancy is finding defending Shifty Schiff harder than she thought! #2020Election.”

Trump’s tweet generated a bunch of mockery, with some pointing out times that the president has slurred his speech. Other’s recalled that Trevor Noah, of the Daily Show, started a #DentureDonald hashtag in 2017. That hashtag came back on Sunday.

Remember tweets like this the next time a Republican says Trump was chosen by God to lead us. https://t.co/t1mCwaM0Ww

THIS GUY wants you to know that someone ELSE'S teeth are falling out of their mouth. https://t.co/oJfxXNx1gJ pic.twitter.com/Z0qv5dbCM4

There is nothing to Trump but projection. He regularly slurs during speeches, likely a result of issues with his dentures. https://t.co/4YPEKiN03e