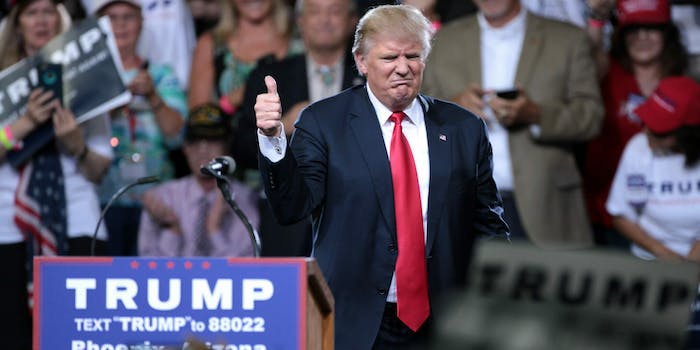 Donald Trump tweets Memorial Day message that’s all about himself

At least he didn't mention the 'haters and losers.'

It’s Memorial Day, so naturally, the U.S. president tweeted out a heartfelt message honoring those who have been lost in service to the country. But Donald Trump is still the president, so on Monday, he injected self-praise into his supposedly unifying message.

Happy Memorial Day! Those who died for our great country would be very happy and proud at how well our country is doing today. Best economy in decades, lowest unemployment numbers for Blacks and Hispanics EVER (& women in 18years), rebuilding our Military and so much more. Nice!

Then, he almost immediately pivoted to what he was watching on Fox News.

“The President deserves some answers.” @FoxNews in discussing “SPYGATE.”

“Sally Yates is part of concerns people have raised about bias in the Justice Dept. I find her actions to be really quite unbelievable.” Jonathan Turley

“We now find out that the Obama Administration put the opposing campaigns presidential candidate, or his campaign, under investigation. That raises legitimate questions. I just find this really odd…this goes to the heart of our electoral system.” Jonathan Turley on @FoxNews.

People mocked Trump for his self-reverential tweet on the patriotic day.

The President of the United States is spending his Memorial Day live-tweeting Fox News, and no one will blink an eye because we're all inured to this kind of thing by now pic.twitter.com/HG752KouqK

You can't say Memorial Day without "me" and "I" https://t.co/LD3BKiRrVg

This is the most inappropriate #MemorialDay comment that a @POTUS has ever made. Self-promotion on a day to remember the fallen, and wishing those remembering their deceased loved ones a “happy” holiday is appalling. #CadetBoneSpurs pic.twitter.com/kRse4dnwiu

Trump’s Memorial Day tweet is terrible but it’s actually an improvement over 2015 when he definitely had no idea what Memorial Day was https://t.co/yEPot6s8bi

This is 10 million times more disrespectful to the military than anything that has occurred in an NFL stadium. https://t.co/KO6bZXjwED

On Memorial Day, the president takes some time to remember that dead soldiers are grateful to him. https://t.co/DZaGWlkm7q

Also: "You can't spell Memorial Day without ME!!!" https://t.co/kTVBQE3r8G

Surprised he didn’t throw in a, “But I prefer soldiers who didn’t die.”

Former President Barack Obama, meanwhile, tweeted a photo of himself standing at the Tomb of the Unknown Soldier.

We can never truly repay the debt we owe our fallen heroes. But we can remember them, honor their sacrifice, and affirm in our own lives those enduring ideals of justice, equality, and opportunity for which generations of Americans have given that last full measure of devotion. pic.twitter.com/pRxwmaMClL

This isn’t the first time Trump has used a holiday Twitter message to praise himself or bash his enemies.

On Independence Day last year, Trump tweeted a video of a choir singing a creepy MAGA song. In 2015, he tweeted a Memorial Day greeting to all the “haters and losers.” He did the same on 9/11 in 2013, and he gave himself credit last year for people saying “Merry Christmas.”

People are proud to be saying Merry Christmas again. I am proud to have led the charge against the assault of our cherished and beautiful phrase. MERRY CHRISTMAS!!!!!

As of this writing, Trump during the three-day weekend has tweeted thrice about Memorial Day, once about North Korea, and nine times about the Russia investigation. He also denied the existence of a White House source, but that was immediately proved to be a lie when reporters revealed the name of the source and audio from the background briefing.