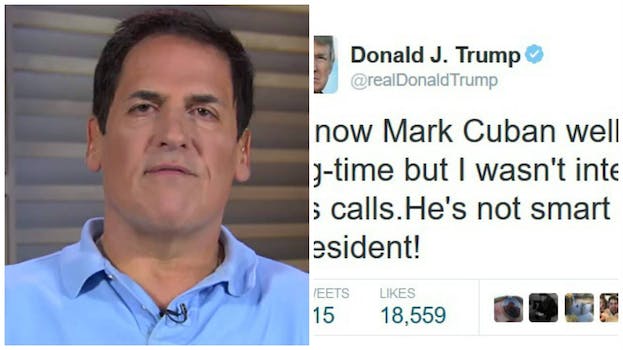 Donald Trump goes after Mark Cuban on Twitter; Cuban laughs in his face

Donald Trump and Mark Cuban have a long history.

I know Mark Cuban well. He backed me big-time but I wasn't interested in taking all of his calls.He's not smart enough to run for president!

Trump seems to be referring to Cuban’s comments in an interview last week with the Fort Worth Star Telegram in which the billionaire warned American CEOs in their dealings with Trump.

“It’s a tough situation for CEOs,” said Cuban, who has previously talked about the idea of running for political office. “You want to make nice with the president because you’re a public company and you have shareholders, and it’s hard to balance doing the right financial thing versus doing what they think is the right thing, whatever your political beliefs are. It’s not an easy position to be in.’’

As for Cuban’s advice, he said, “Do what you think is right. Be an American citizen first. In the bigger scheme of things, our country benefits from peaceful activism a lot more than it benefits from one more shoe being sold, or one more basketball ticket being sold, for that matter. The people that say stay away from politics are the people that are looking for politics.”

Apparently, Trump didn’t appreciate that analysis and went after Cuban—who said in July 2015 that Trump was “probably the best thing to happen to politics in a long, long time” but who endorsed Hillary Clinton for president a year later and called Trump a “jagoff.”