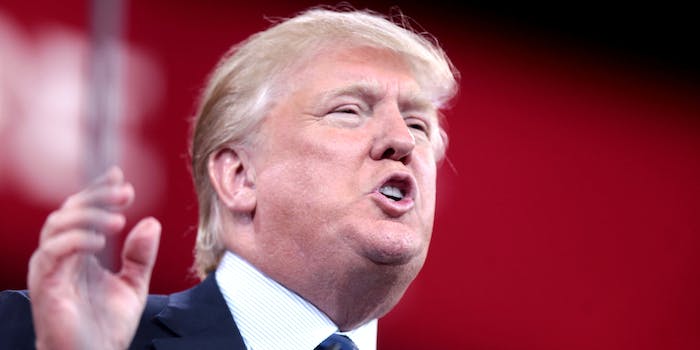 Trump insists it was his decision to cancel his partnership with Macy's.

Donald Trump is now at war with one of America’s most popular retailers.

Macy’s department store announced on Wednesday its decision to cut ties with Trump, a Republican 2016 presidential candidate, over his recent derogatory remarks about Mexicans.

“We are disappointed and distressed by recent remarks about immigrants from Mexico. We do not believe the disparaging characterizations portray an accurate picture of the many Mexicans, Mexican-Americans and Latinos who have made so many valuable contributions to the success of our nation,” Macy’s said in a statement.

“Clearly, NBC and Macy’s support illegal immigration, which is totally detrimental to the fabric of our once great country.”

In a statement of his own, however, Trump claims that he—not Macy’s—brought the business relationship to an end, contradicting the store’s version of events.

Macy’s decision was likely motivated by a MoveOn.org petition calling on the company to terminate its relationship with Trump. As of Wednesday morning, the petition had collected nearly 730,000 signatures.

The store said Trump’s statements, which referred to Mexican immigrants as “killers and rapists,” were “inconsistent with Macy’s values.” The store intends to “phase-out the Trump menswear collection,” which it has sold since 2004.

Macy’s is only the latest company to sever ties with Trump. NBC and Univision have vowed to no longer air the Miss USA and Miss Universe pageants. NBC has also cancelled Trump’s show, “The Apprentice.”

In a statement emailed to the Daily Dot, Trump said that it was his decision to terminate the partnership with Macy’s, not the other way around. “While selling Trump ties and shirts at Macy’s is a small business in terms of dollar volume, my principles are far more important and therefore much more valuable,” he said.

Trump added that he was never happy with the fact that his ties and shirts were made in China and, should he decide to make a new product line, it would be manufactured in the United States.

For all of those who want to #MakeAmericaGreatAgain, boycott @Macys. They are weak on border security & stopping illegal immigration.

“I have always said that if you are successful, it is very hard to run for office, especially the office of President,” Trump said. “I have also continually stated that I am not beholden to anyone and this includes NBC and Macy’s. Clearly, NBC and Macy’s support illegal immigration, which is totally detrimental to the fabric of our once great country.”