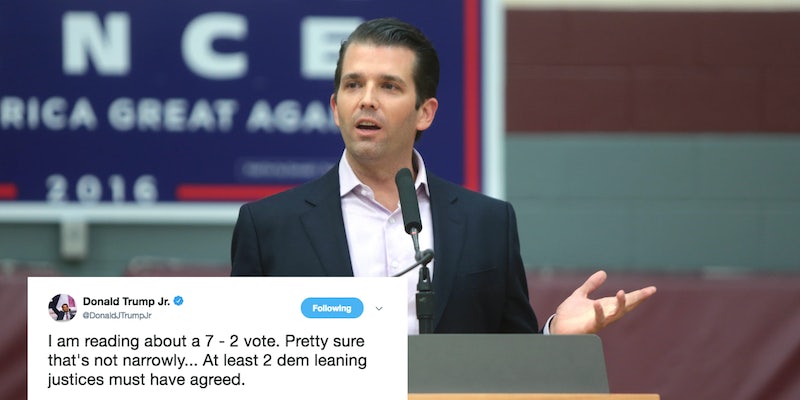 The noted legal scholar weighs in.

Today, the Supreme Court sided with a baker in Colorado in his case over refusing to make a wedding cake for a gay couple. While the ruling was 7-2 in favor of Jack Phillips, the decision focused solely on whether the Colorado Civil Rights Commission adequately addressed the baker’s faith when issuing a judgment against him.

The Supreme Court found it did not, saying the commission was hostile toward Phillips’ religious beliefs.

The court did not choose to rule on the actual issue of whether businesses can exercise free speech by refusing to serve people because of their sexual orientation, which is why many organizations referred to it as a “narrow” decision.

That nuance, however, was lost on the president’s son, Donald Trump Jr.

I am reading about a 7 – 2 vote. Pretty sure that's not narrowly… At least 2 dem leaning justices must have agreed. https://t.co/vOjX0mOHPf

Twitter was swift to let the extremely online child of the president know he was … extremely incorrect.

the legal DECISION was narrow. the AP tweet wasn't talking about the vote count. why am i typing this https://t.co/yyB3pSfcQt

The court specifically shied away from making a major pronouncement on the matter.

“The outcome of cases like this in other circumstances must await further elaboration in the courts, all in the context of recognizing that these disputes must be resolved with tolerance, without undue disrespect to sincere religious beliefs, and without subjecting gay persons to indignities when they seek goods and services in an open market,” Justice Kennedy wrote in his decision, which was probably not parsed by Trump Jr.