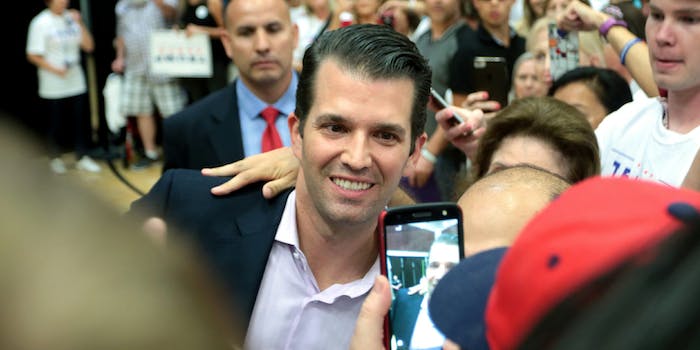 Trump Jr. tweeted: “Karen Handel becomes 1st Woman Rep GA has sent to Congress. Still waiting for the glass ceiling stories, or do conservatives not get them?”

There have been five women elected to represent Georgia in the House of Representatives.

Karen Handel becomes 1st Woman Rep GA has sent to Congress. Still waiting for the glass ceiling stories, or do conservatives not get them?

Some defenders online seem to think Trump Jr. meant “Republican” when he wrote “Rep” in his tweet.

“Rep” traditionally is used as the shorthand for “Representative”—for example, once Handel is sworn in, she will be known as Rep. Karen Handel (R-Ga.).

If he did mean Republican, he would be right: All five women to previously serve in the House of Representatives were Democrats. (However, the party was much different when some of the women lawmakers served than it is today.) But if that’s the case, what glass ceiling is Trump Jr. referring to? A glass ceiling imposed on Republican women only?

If Trump Jr. truly wanted to avoid confusion he should have written “GOP” (same amount of characters) or even just “R” so he could have added a few more. Rookie mistake.

Regardless of what Trump Jr. meant, people were quick to call him out on the bad tweet.

If it means Representative, DJ is wrong. If it means Republican, then the only glass ceiling broken is the one imposed by his own party.

She's not the first woman. Is Google really that hard to use?