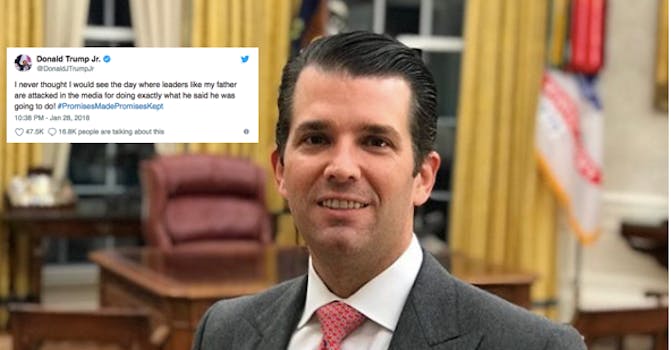 All the times Donald Trump Jr. has tried to win his father’s love online

One of the sure ways to discover that President Donald Trump has made a declaration or power play is to check his eldest son’s Twitter account. Even something as beauracratic and geopolitically complicated as the president’s decision to pull out of the Iran deal is stripped of its intricacies and juiced up on Don Jr.’s Twitter feed as he tweeted “and we’re out. Another promise fulfilled.”

But, with a closer look at Donald Trump Jr.’s Twitter, you might notice a theme: he’s just a kid trying to get his father to love him. And he does that by constantly reminding his old man that he’s the greatest president in the history of the office.

I never thought I would see the day where leaders like my father are attacked in the media for doing exactly what he said he was going to do! #PromisesMadePromisesKept

Like his father, Don Jr. uses Twitter to attack whoever is saying less-than-splendid things about the president–frequently, that’s the media. But these clapbacks always seem to include I love you dad undertones. And that’s probably a good tactic, because we know that President Trump is constantly on Twitter, which means that he’s definitely seeing his son’s tweets in his timeline. Peek the Twitter bot that recreates the president’s feed and you won’t have to look too far to find a tweet from the eldest son.

When Jeb Bush quipped, “my kids actually love me,” Don Jr. passionately came to his father’s defense, writing “Jeb! I love everything about my father. I love that he’s a fighter, I love that he has guts, I love that he’s President (all those things you’re not).” Eric Trump offered a less impassioned and almost robotic note: “I love my father very much.” Ivanka didn’t even bother to address the remark on Twitter.

At the moment, his pinned tweet is that ubiquitous clip of then-citizen Donald Trump telling Oprah that he would probably never run for president. Don Jr. captioned the video “very proud to have a President do what he said he was going to do.” Yes, it seems like a superfluous nod to the commander-in-chief, but it also means that every time President Trump visits his son’s Twitter feed, he is met with a message–I’m proud of you dad.

Of course, there’s a fantastic irony in that caption for a video in which Trump does exactly what he said he wasn’t going to do–run for president. But that’s another conversation entirely.

Additionally, you’ll notice that Don Jr. constantly thanks his father, tagging him in tweets. Which, regardless of your relationship with your old man, is a rather bizarre way to express your support of him.

Amazed we’ve never addressed this before, I mean we’ve only been taken advantage of for decades… I wonder what changed?

It’s nice to have someone with resolve as #potus finally.

So great to see this… Thanks @realDonaldTrump and the republicans. Also note not one Democrat voted for this. https://t.co/sI25IaVilZ

While Trump’s policy agenda might seem a bit confusing at times–he frustrated a large swath of his base by bombing Syria, and even pushed Alex Jones to tears–his primary goal as president seems to be undoing the accomplishments of his predecessor. He’s done his damnedest to suffocate Obamacare and his decision to tear up the Iran deal seems aimed at erasing the Obama legacy. In this endeavor, he finds a loyal cheerleader in Don Junior.

The eldest son attacks Obama with a fervor, but the jabs are always oneupances. The sort of “President Trump is better than President Obama” notes that the current commander-in-chief feeds on. When a group of top ISIS operatives were captured last week, Don Jr. tweeted a link to The New York Times story about them, adding “Wow. I wonder if these are the guys Obama have back in exchange for Bergdahl?” In January, he tweeted a link to a story from The Hill, highlighting the headline: “Economists agree: Trump, not Obama, gets credit for economy”

Sometimes, his my dad is better than your president boasts are even more on the nose:

If a Democrat President in 8 years achieved what my father has done in one year, media and the left would be heralding it as “historic, monumental, and unprecedented”

I’m so glad to wake up in a country where we finally have a president who cares more about America than he does about our enemies feelings. Very refreshing!!! #maga

We would be remiss not to note that Donald Trump Jr.’s Twitter page gets a lot of play and that he amplifies some alt-lite personalities that traffic conspiracy theories and play host to identity politics. He frequently retweets Jack Posobiec–the Pizzagate conspiracy theorist who hoisted a “Rape Melania” sign at a Trump protest. Which means that these voices are given time in Trump’s head and arguably legitimized within the national political discourse.

Watching media trying to ask the Rear Admiral Jackson (The White House Dr appointed under Obama) questions in ways that leaves an opening to attack @realDonaldTrump's health after an amazing report, cognitive & otherwise, is like watching Dumb & Dumber. What are the chances he’s sick? One in million "So you're saying there's a chance! Whooo Hooo!!!” We need to test them for #trumpderangementsyndrome

This was truly one of the greatest news conferences ever. The desperation of he media was simply incredible. Nice to put their BS theories to rest once and for all. #maga

It’s a special bond between a father and son. One that we would never criticize, but it’s also really strange that Don Jr. seems to foster that bond primarily through 280 character Hallmark cards.