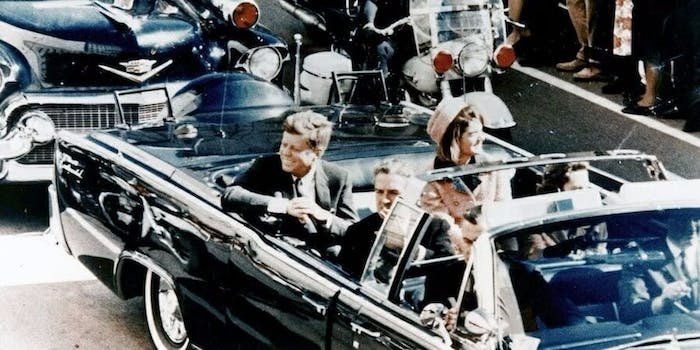 This could answer plenty of questions.

Though there were media reports in the past day that President Donald Trump would block some of the John F. Kennedy assassination files that are set to be opened on Thursday, Trump tweeted Saturday morning that he would allow the classified information to be released.

Subject to the receipt of further information, I will be allowing, as President, the long blocked and classified JFK FILES to be opened.

Trump, of course, could change his mind, and the wording of his tweet (“subject to the receipt of further information”) could potentially give him some room to block files that risk national security and/or intelligence gathering. But his tweet contrasted what some media outlets reported on Friday—namely that Trump would not allow some of the files to be released.

As Politico noted, the majority of the thousands of pages of Kennedy assassination files kept in the National Archives were created in the 1960s and 1970s, but there is some information that was created by the CIA in the 1990s that could detail national security secrets the administration might not want made public.

In 1992, Congress passed the JFK Assassination Records Collection Act that would allow a number of documents relating to Kennedy’s 1963 assassination to be made public on Oct. 26, 2017. But a congressional official told Politico that Trump could block the release of some information to protect the CIA’s methods and the identity of some people who still might be alive.

“Everything is in flux,” the official said this week before Saturday’s tweet. “I guess the president could change his mind at the last minute. But unless there is a dramatic change of heart, there will not be an absolutely full release of this information. I think you’ll see a lot of the files next week. Just not all of them, unfortunately. And a lot of documents that should have been released in full won’t be—there will be deletions.”

According to the Dallas Morning News, some of the classified information could include a personality study of Kennedy killer Lee Harvey Oswald by the CIA, congressional testimony from CIA officers, and letters from former FBI director J. Edgar Hoover and former first lady Jackie Kennedy.

While the Washington Post reported that some in the government, including CIA Director Mike Pompeo, has been lobbying the the president not to release all the documents. But Roger Stone, Trump’s longtime adviser, told Infowars’ Alex Jones that he told Trump that he should publish all the documents.

Assuming some or all of the documents are released Thursday, the National Archives reportedly will make them all available on its website.