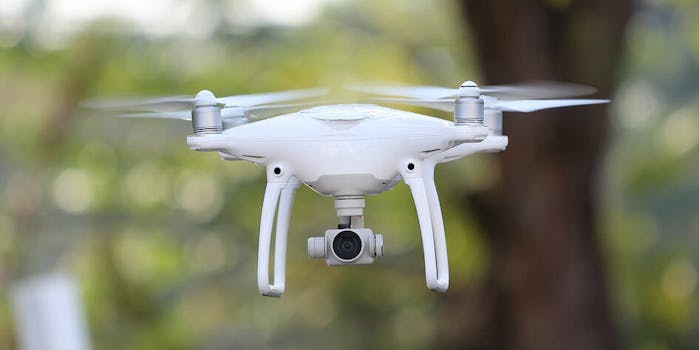 The UAV will be tested at Trump's private golf course in August.

The Secret Service will use a drone to protect Donald Trump when he tees off at his private golf club in New Jersey during the president’s upcoming 17-day vacation.

In a document released Wednesday, the Department of Homeland Security revealed it would release a tethered unmanned aircraft system when the president visits Trump National Golf Club in Bedminster in August.

The agency said it will test a proof-of-concept to determine the potential of using drones to protect the president. The device is set to fly autonomously at an altitude of 300-400 feet, eyeing the perimeter of the nearly 7,000-yard course. It will use eletro-optical and infrared cameras to look for threats, and it will be powered by a micro-filament tether—which enables the drone to stay in the air indefinitely while moving data from the air to the ground via a wired connection.

The drone is being tested as part of the Secret Service’s efforts to tie several types of UAVs and tethered systems into its overhead security efforts. The current method is to use manned aircraft supplied by local, state, or federal government agencies. These are often too loud and don’t provide consistent coverage, according to Reuters.

The Secret Service said its drone may fly near private residences, which could lead to privacy violations. It’ll notify everyone at the golf course that the grounds are being monitored by an eye in the sky. However, the agency did admit the risk that some people in range of the drones won’t be aware of their presence.