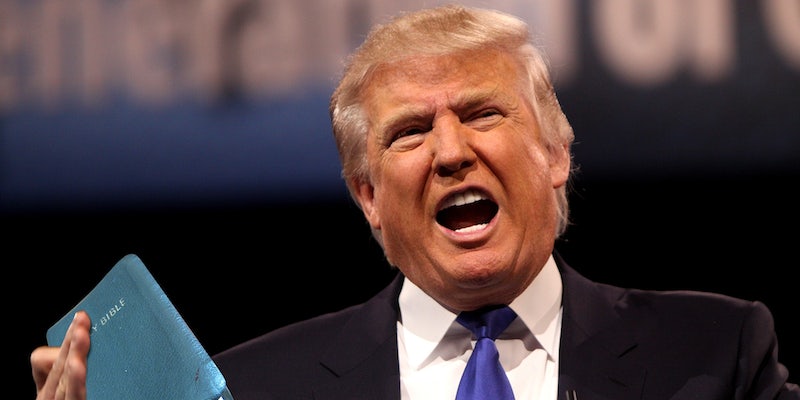 Trump's evangelical support is strong. Will it remain strong after this?

Donald Trump is “very, very proud” that he’s a Christian, but he might want to brush up on his biblical history if he intends to win his fellow Christians’ vote.

In a speech on Monday at Liberty University, a Christian college, the Republican presidential frontrunner bungled his citation of a Bible verse while saying Christianity needed to be protected.

“We’re going to protect Christianity. I can say that. I don’t have to be politically correct,” Trump told the religious crowd. “Two Corinthians, 3:17, that’s the whole ballgame … is that the one you like?”

In fact, “two Corinthians” is not the proper way to refer to this book of the Bible—not because it bucks tradition, but because it’s grammatically incorrect.

Second Corinthians—usually written “2 Corinthians,” which could explain Trump’s mistake—is a book of the New Testament attributed to Paul the Apostle. Historically speaking, it is widely believed to be the second letter written by Paul (the first being 1 Corinthians) to his congregation in Corinth. Thus, “Second Corinthians” is shorthand for “second letter to the Corinthians.” Two Corinthians simply doesn’t make sense—and the crowd at Liberty University let Trump know it with a few verbal jibes heard during his speech.

Seems pedantic, but no regular bible reader would ever cite "Two Corinthians" when citing Paul's second epistle to the church at Corinth.

Crowd grumbles when Trump refers to "Two Corinthians." Students correct him, saying it's supposed to be "Second Corinthians “

What is "Two Corinthians?"

As the Washington Post reports, however, evangelical leaders are less enthused about a Trump presidency due to the real estate mogul’s business dealings in gambling, among other concerns. One such leader, Russell Moore, president of the Southern Baptist Ethics & Religious Liberty Commission, derided Trump throughout his Liberty University speech in a series of subtweets.

Winning at politics while losing the gospel is not a win.

Politics driving the gospel rather than the other way around is the third temptation of Christ. He overcame it. Will we?

Trading in the gospel of Jesus Christ for political power is not liberty but slavery.

This would be hilarious if it weren't so counter to the mission of the gospel of Jesus Christ. #TrumpatLiberty

Evangelicals can love a golden calf, as long as Aaron promises to make Mexico pay for it.

If other evangelicals side with Moore over Trump, the businessman’s problem the Christian right may be bigger than a simple gaffe.