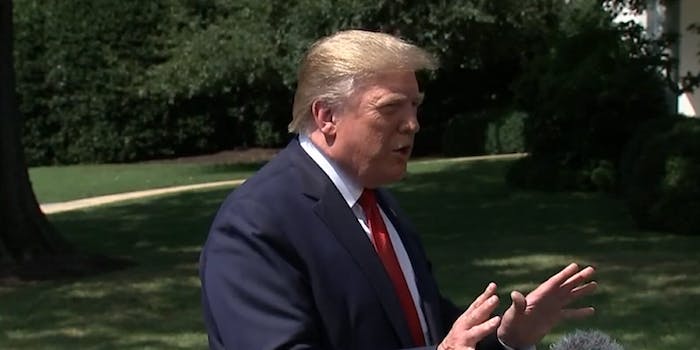 President Donald Trump called himself the “the chosen one” while looking up at the sky on Wednesday when talking about the trade war with China.

“Somebody said it’s ‘Trump’s trade war.’ This isn’t my trade war,” the president said while talking with reporters. “This is a trade war that should have taken place a long time ago by a lot of other presidents. Over the past five or six years, China has made $500 billion dollars. $500 billion. Ripped it out of the United States. And not only that, if you take a look, intellectual property theft, add that to it, and add a lot of other things to it.”

President Trump: "I am the chosen one."

Trump’s remarks came just hours after he quoted a supporter in a tweet where they said people in Israel believe he is the second coming of God.

Trump was clearly referring to being the president that decided to start a trade war with China. But the fact that he quoted someone in a tweet saying some believed he was the second coming of God and called himself the “chosen one” in one day was too much for many.

“King of Israel” and “I am the chosen one” on the same day, huh https://t.co/MfKJKBPVxS

A LOT OF PEOPLE ARE SAYING THAT I AM THE CHOSEN ONE. pic.twitter.com/RER6kpnzpE

While talking to press, 45 just said, "I am the chosen one." pic.twitter.com/BvLIFvLWaI

Trump: "I am the chosen one." pic.twitter.com/Do7iSB05fS

@realDonaldTrump did he just call himself the chosen one on national cable TV????? pic.twitter.com/MyISyyMKUj