Donald Trump in ’89: Unshackle cops from cries of police brutality

Donald Trump isn't soft on crime—even when the facts are against him.

Donald Trump wanted all the suspects dead, even though the youngest was a 14-year-old boy and the oldest was just 16.

In 1989, New York City was taken by a frenzy. On the night of April 19, a 28-year-old female jogger named Trisha Meili was raped and beaten in Central Park so badly that she went into a coma for 12 days. Almost instantaneously, the entire country focused in on what the New York Times called “one of the most widely publicized crimes of the 1980s.”

Since that night 26 years ago, the violence in Central Park entered into the city’s darkest folklore. An entire generation of New Yorkers were raised in fear of what lurks in our parks at night.

Today, Trump is the current leader of the Republican 2016 presidential race. He has made crime a centerpiece of his platform—the crime of illegal immigration, in particular, and the Mexican “rapists” and “murderers” he insists are crossing the U.S. border at a staggering rate (despite facts to the contrary).

Police brutality and crime have become increasingly crucial issues in the 2016 race, as Trump has come out swinging against both Jeb Bush, the former governor of Florida and one of his closest GOP rivals, and Bernie Sanders, the senator from Vermont and Democratic presidential candidate who’s in communication with leaders of the Black Lives Matter movement to speak about police brutality.

For Trump, the solution is to be much harsher on criminals and much easier on cops, no matter the cries of “police brutality” from the public. That’s been his very public position for 26 years, ever since that brutal rape jolted the country with fear.

The New York City of 1989 was, in many ways, a tinderbox of racial tension, expanding inequality, and high crime.

“None of us is safe,” New York Democratic Gov. Mario Cuomo said in response to the crime. “Even if you lock yourself behind doors.”

“CIVIL LIBERTIES END WHEN AN ATTACK ON OUR SAFETY BEGINS!”

The Central Park jogger case—where a white woman, an investment banker, was found comatose in a park surrounded by the city’s wealthiest neighborhoods—was the spark that set the whole place to political flame.

Trump, then 43 years old, was already a New York icon of wealth and power who was making his mark on the Gotham skyline from the right side of the city’s growing inequality gap. By the early 1980s, he was known for his “empire and ego,” according to the Times, as well as his “flair for self-promotion, grandiose schemes—and, perhaps not surprisingly, for provoking fury along the way.”

For decades, Trump has made his political opinions well known. He’s spoken out on Washington policies and, in the Central Park rape case, crime. Although he’s occasionally criticized the war on drugs since at least 1990, he’s publicly defended America’s world record prisoner population, harsh sentencing laws, and death penalty. In 2000, Trump wrote that his “only complaint is that the lethal injection is too comfortable a way to go”—a sentiment he’d been pushing since the Central Park rape made headlines more than a decade before.

Hours after the jogger was found with a fractured skull, heavy bleeding, and near-hypothermia in the park, police were making arrests. Five teenagers—as young as 14 and as old as 16, four black, one hispanic, all poor—were taken into custody, charged, and coerced into making false confessions after 28 hours of interrogation, according to all available evidence. Their confessions often didn’t match the verifiable facts from the crime scene. Within a few days, the teens were denying publicly that they’d ever seen the woman, never mind hurt her.

The boys had not yet seen their day in court, but the case had already been mostly decided in the court of public opinion—and by Donald Trump.

When the Central Park jogger case exploded across the media, Trump was determined to use his millions of dollars to have his say heard by all. In early May 1989, about two weeks after Meili was found in the park, Trump paid a reported $85,000 to take out a full page ad in the city’s four biggest newspapers urging New York to “BRING BACK THE DEATH PENALTY” for the alleged rapists—a punishment banned for that crime by a 1977 Supreme Court decision.

In arguing that a 14-year-old boy should be killed, he pushed New Yorkers to “unshackle [police] from the constant chant of ‘police brutality’” that overtook the city then as it has in the past year.

Trump’s anger stemmed from the fact that the boys were part of a group of teens that committed battery against multiple people—including a homeless man, jogger, and bike riders—in Central Park that fateful night. Although the rape suspects claimed they weren’t a direct part of those events either, they did admit to seeing several assault and battery crimes happen. For that, Trump joined the chorus against the teens.

“CIVIL LIBERTIES END WHEN AN ATTACK ON OUR SAFETY BEGINS!” Trump wrote in ecstatic capital letters, bemoaning the “breakdown of life as we knew it” because of the teens he deemed “’wild criminals … dispensing their own brand of twisted hatred.” 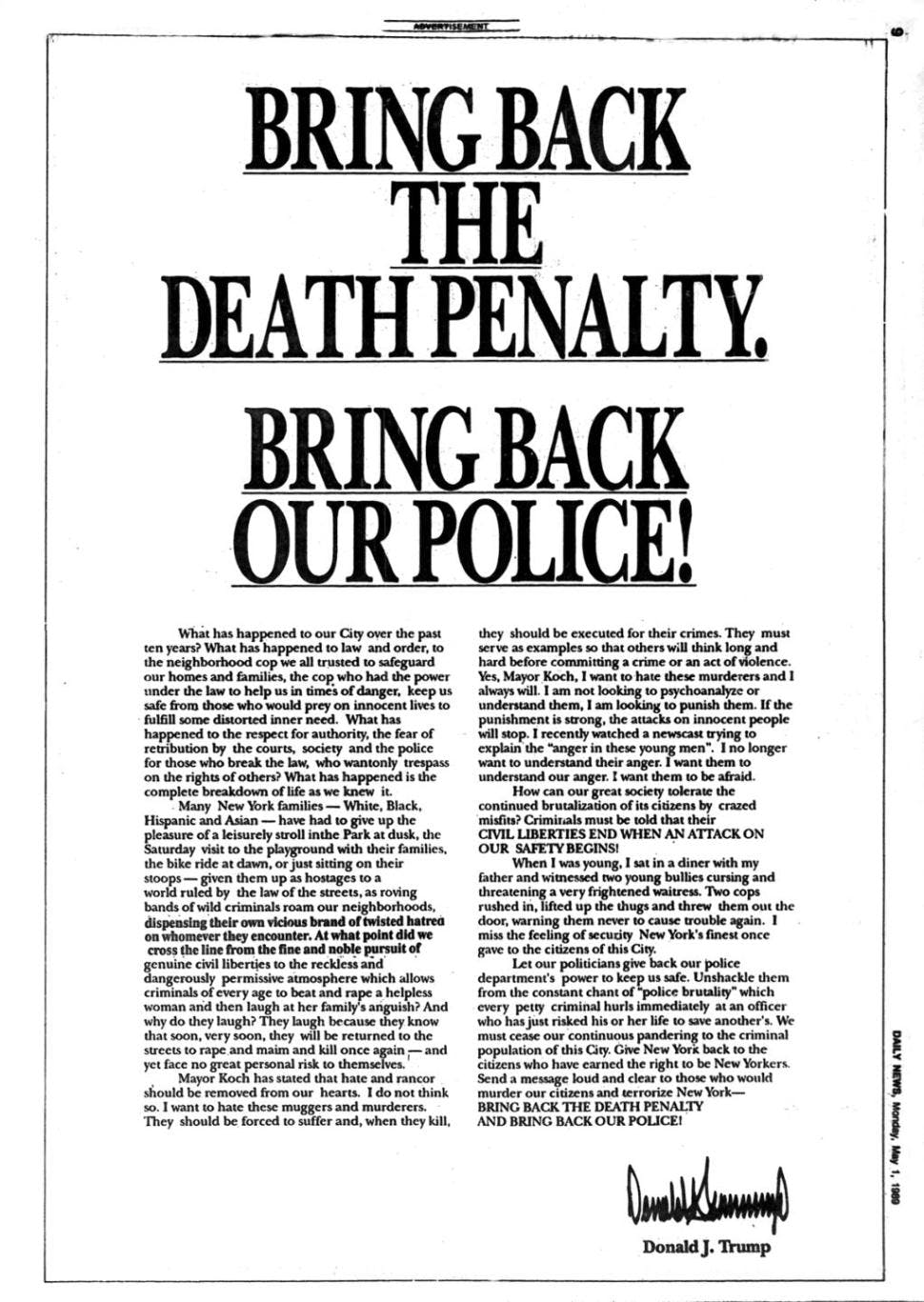 On television, Trump proclaimed his “hate” for the alleged group of rapists while reporters for the New York Post plastered big headlines like “TRUMP WANTS THUGS TO FRY.”

“Yes, Mayor Koch, I want to hate these murderers, and I always will,” Trump wrote, referring directly to the group. “I am not looking to psychoanalyze or understand them. I am looking to punish them.”

The Central Park rape case fueled a successful push to bring the death penalty back to New York. In 1995, then-Gov. George Pataki made lethal injections legal.

In fact, a week after he took out the full-page ad, Trump visited in the hospital a black female rape victim from Brooklyn, who was thrown off of a Crown Heights roof. Trump promised to the press to pay her medical bills.

Trump injected himself into the ongoing Central Park case almost immediately after the rape took place at a time when the consensus narrative was that the boys were guilty beyond any doubt. Caught up in that wave, newspapers published the names of the suspects despite the fact that they were minors, a significant shift from usual press policy.

In the months following, problems with the official story emerged.

The DNA evidence left on the victim didn’t match any of the suspects, and none of the boy’s fingerprints were found at the scene of the crime or on the victim. For such a brutal, messy crime scene to have no matching evidence is an incredible, infinitesimal improbability. At the time, it was popularly viewed as a strange detail in an otherwise clear case.

“I want to hate these muggers and murderers,” Trump wrote. “They should be forced to suffer and, when they kill, they should be executed for their crimes.”

Trump’s advertisements were reportedly pinned to the windows of several bars and shops around the city. Trump wasn’t alone in his emphatic anger and want for execution of the group of teens. In newspapers around the country, columnists like Pat Buchanan called for hangings.

Alas, all of them were wrong.

In August 1989, four months after the Central Park rape took place, a serial rapist named Matias Reyes was captured after he raped several women and killed one in and around Central Park in the days and weeks surrounding the jogger’s case.

Unlike the five teenagers, who became world-famous for the crime, Reyes provided a detailed and accurate confession that matched exactly the scene of the crime. More importantly, his DNA matched the DNA found on the victim at the scene.

It would be 13 years until Reyes confessed to the Meili rape, allowing the five wrongfully convicted teenagers—men at this point—to all finally leave jail with the charges vacated. There was no apology or help from the city upon release. A decade later, the group was awarded a $41 million lawsuit for malicious prosecution settled by current New York City Mayor Bill de Blasio.

When the lawsuit was finally settled in 2014, the media made little noise about the story. Trump, however, would not remain silent.

In an opinion column for the New York Daily News, one of the newspapers that printed his “BRING BACK THE DEATH PENALTY” ad, Trump called the settlement “a disgrace” to the taxpayers, “a heist” against the city, and argued that the “young men do not exactly have the pasts of angels.”

Even amidst the frenzy of 1989, Trump’s full page ads received criticism. In an interview with the United Press International on the day the ads were printed, Trump defended them: “The criminal is being protected, and the victim is getting zero protection. How does she [the jogger] have civil liberties lying in hospital, close to death, and these criminals are already chanting ‘police brutality?’ It’s absolutely disgraceful, disgraceful.”

Since the boys’ convictions have been vacated—after serving between six and 13 years in prison each—Trump has offered no sign that he’d changed his mind.

Like Trump, several police officers and prosecutors involved in the Central Park case argue that Reyes’s guilt doesn’t prove the boy’s innocence. Instead, their theory—for which there is no evidence offered to support—is that the boys started the assault, and Reyes finished it.

“Tell me,” Trump tweeted in 2013, “what were they doing in the Park, playing checkers?”

A few years later, Trump responded indirectly: “The recipients [of the lawsuit] must be laughing out loud at the stupidity of the city.”