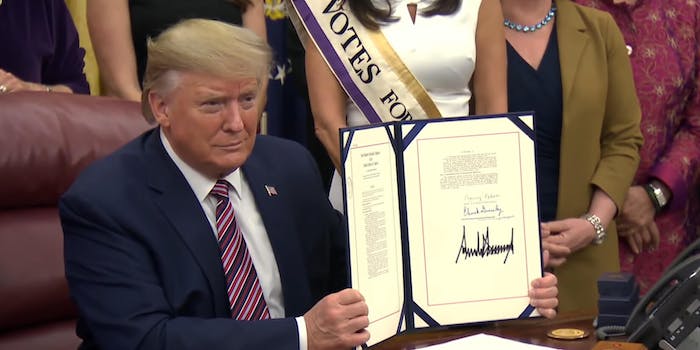 A lot of people pointed out the obvious.

President Donald Trump on Monday wondered why a centennial coin commemorating the passage of the 19th Amendment 100 years ago was not made sooner, puzzling… everyone?

Trump signed the Women’s Suffrage Centennial Commemorative Coin Act on Monday. The bill will have the Treasury Department mint 400,000 $1 silver coins that “are emblematic of the women who played a vital role in rallying support for the 19th Amendment to the U.S. Constitution.”

The coins will be issued through 2020.

“They’ve been working on this for years and years. I’m curious why wasn’t it done a long time ago?” the president said.  “And also, I guess the answer to that is because now I’m president, we get things done. We get a lot of things done that nobody else got done.”

"I'm curious why wasn't it done a long time ago? And also, I guess the answer to that is because now I'm president, we get things done."

Later, after signing the bill, Trump asked again why the coin wasn’t “done a long time ago, years ago?”

The coin is meant to commemorate 100 years since the 19th Amendment was ratified.

That reasoning for the coin being minted now—instead of “a long time ago”—was not lost on people.

Or maybe the answer is because the Nineteenth Amendment was ratified in 1919, so the centennial is this year? https://t.co/BJA372nFQY

A centennial is 100 years so maybe it wasn’t done because we had to wait https://t.co/q7haT6j08A